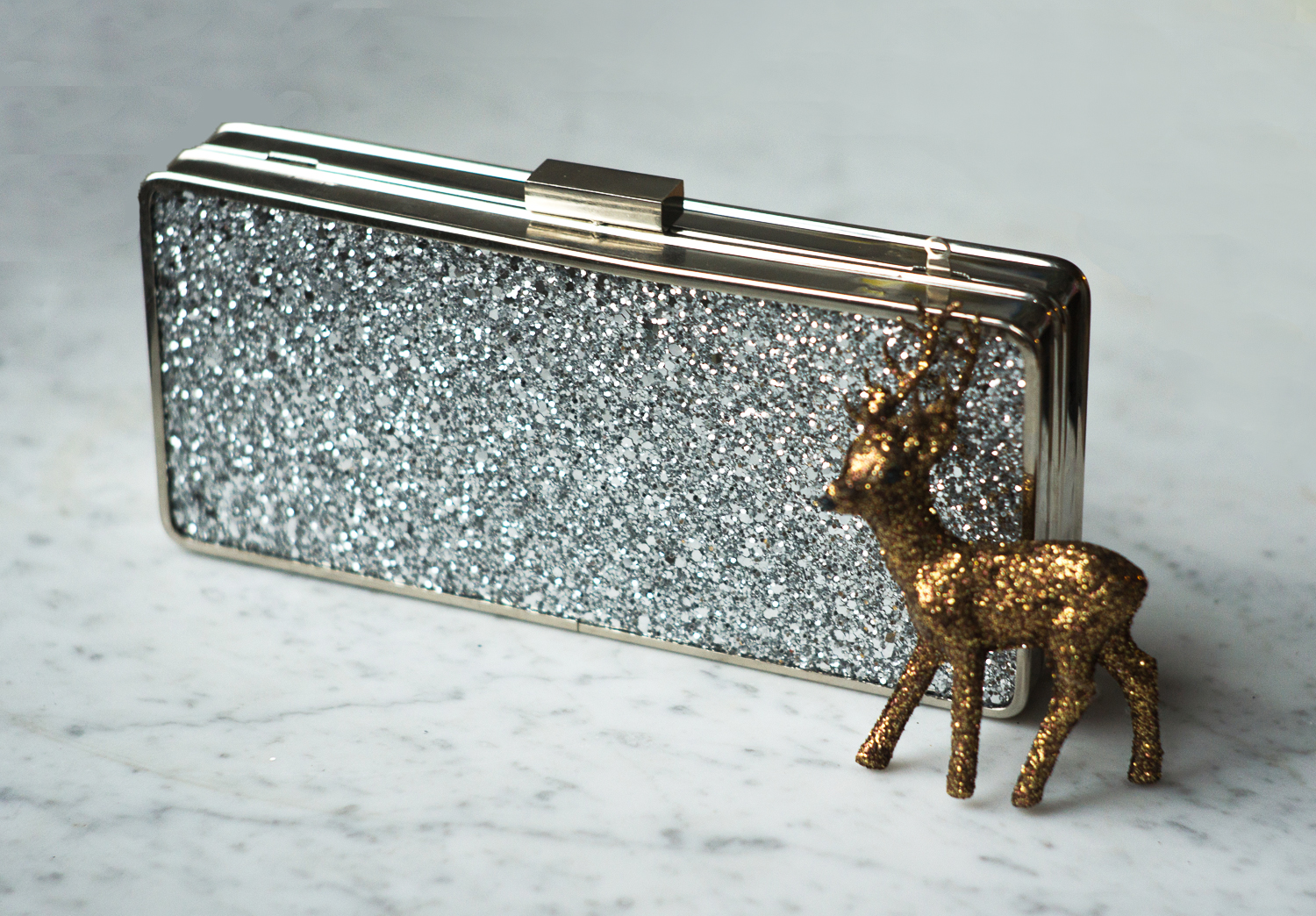 I’m starting to wonder if I’m capable of doing any projects that don’t involve glitter, gilding, or sparkle in some way. Based on my last 10 posts or so…. I think not.

I’m ok with that.

This project was pretty usual for me because it went so smoothly and quickly. It was one of those things where all the stars aligned- I had all the materials I needed, I wasn’t overly ambitious, and, well that’s pretty much it. Turns out that’s all you need to have an enjoyable time.

So I’m notorious in my own mind for bringing really inappropriate bags to formal functions- like a tote bag to a wedding. I always MEAN to find a cute clutch, but then I forget, and it’s the day of the wedding- and well, a tote it is. I generally just try to stash it under the table or something when I get there. Or I’ll make Nick carry my stuff.

I bought a couple purse frames a LONG time ago with delusions that I was going to make cool laser cut clutches. I started one, once.

So these damn frames have been hanging around, getting caught on stuff and just generally taking up space. It turns out that it’s incredibly easy to assemble them into a functional object for almost no money. The purse frame is about $9- everything else I used was already a part of my material arsenal, and therefore, free. I decided to use the glitter canvas because it was on the floor next to the frames. 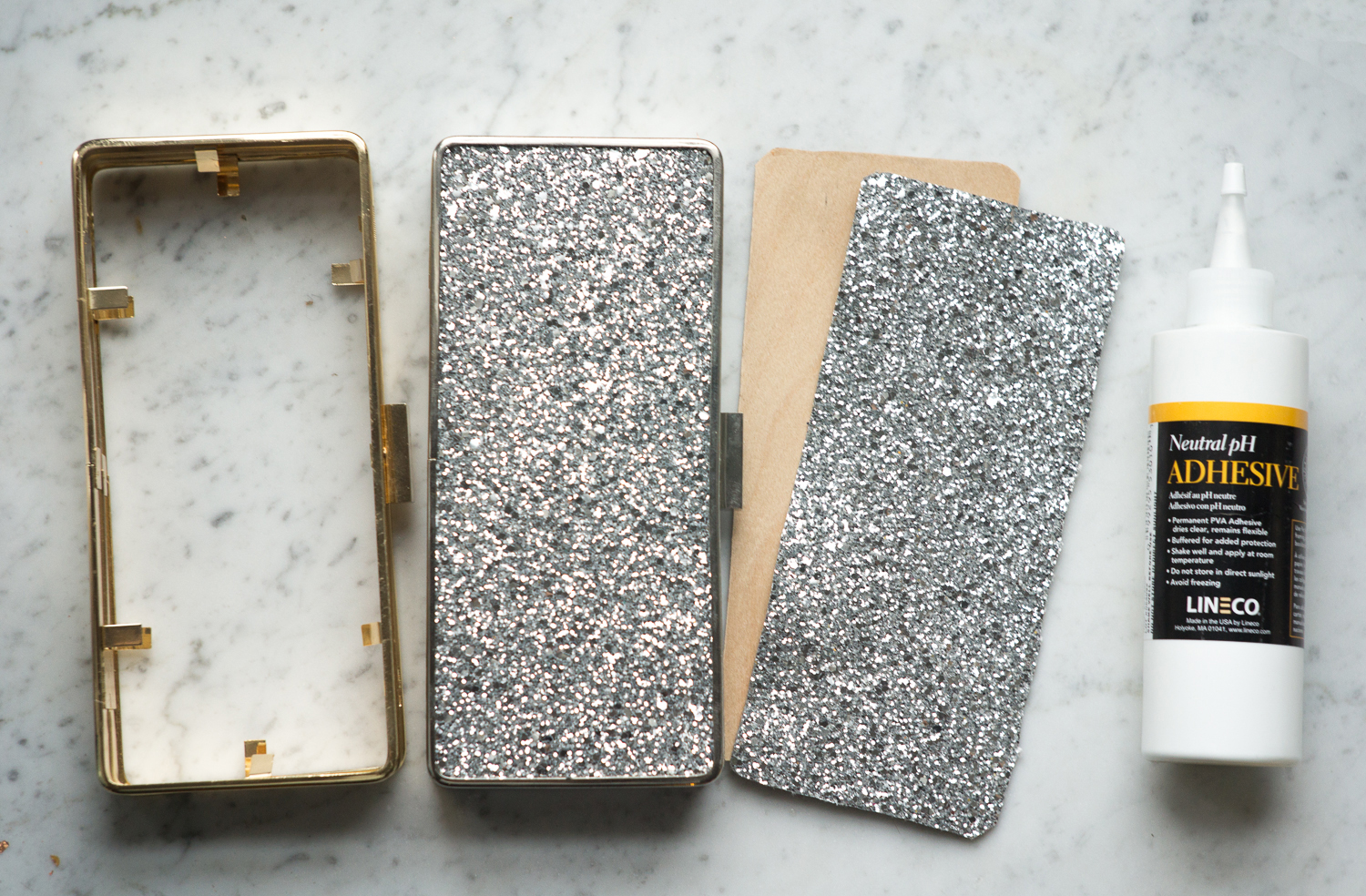 1. Measure the inner dimensions of your clutch frame. You want your wall to fit snugly into the frame and extend slightly past the opening- because you don’t want it to pop out mid-party and expose all your secrets. You can also trace the opening, then add 1/16″- 1/8″ allowance all around.

2. Cut two rectangles using the measurements you obtained in step one from both the plywood and the glitter canvas. The plywood I used was thin enough to cut with scissors- but use your worst ones. Between the glitter canvas and the wood, you are able to seriously dull some scissors. Round the corners of each rectangle slightly, as seen in photo above. 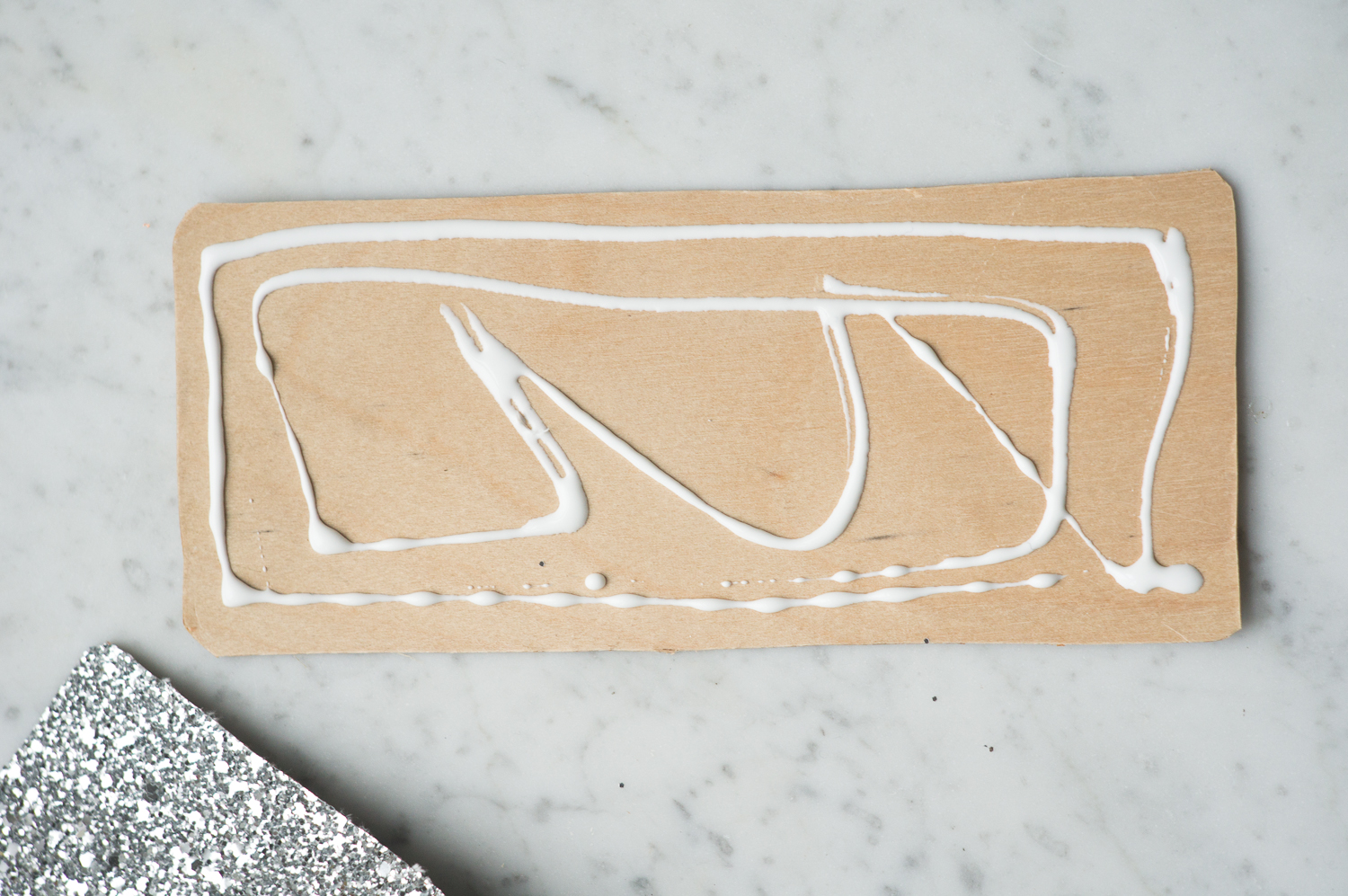 3. Put a bunch of glue on your wood layer. Try to get pretty good coverage near the edges so your canvas isn’t peeling up and looking like garbage. Press the canvas onto the glued piece, then weigh down with a book and let it dry fully- at least a couple hours. It will warp if you remove the weight too soon. 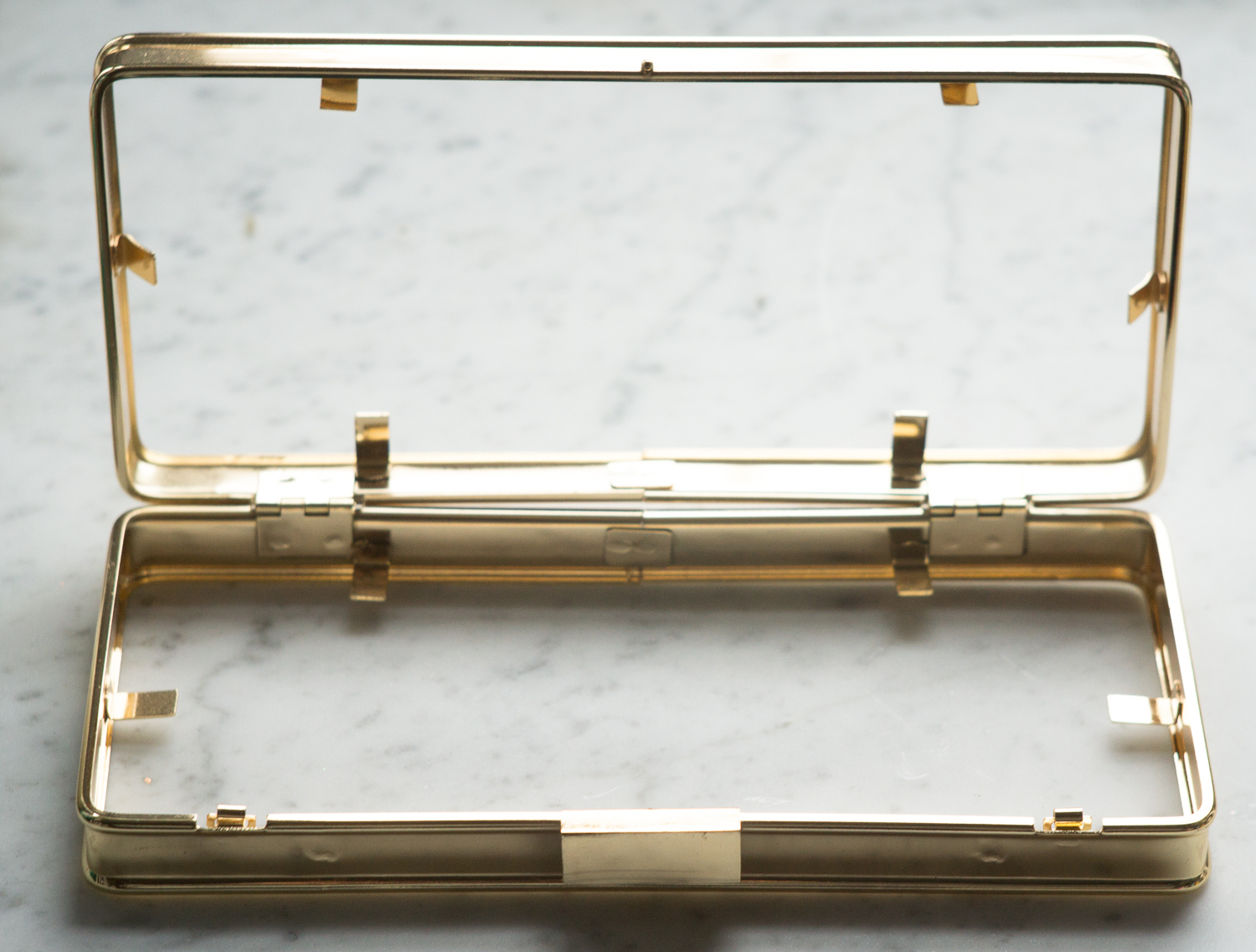 4. This is what the clutch frame looks like open. Those little tabs are kind of useless- they’re hard to open and close. You’d think you’d be able slide your wall into place past them, but it’s almost impossible because they don’t bend back far enough. So I actually popped the walls in from the front, which is kind of tricky: 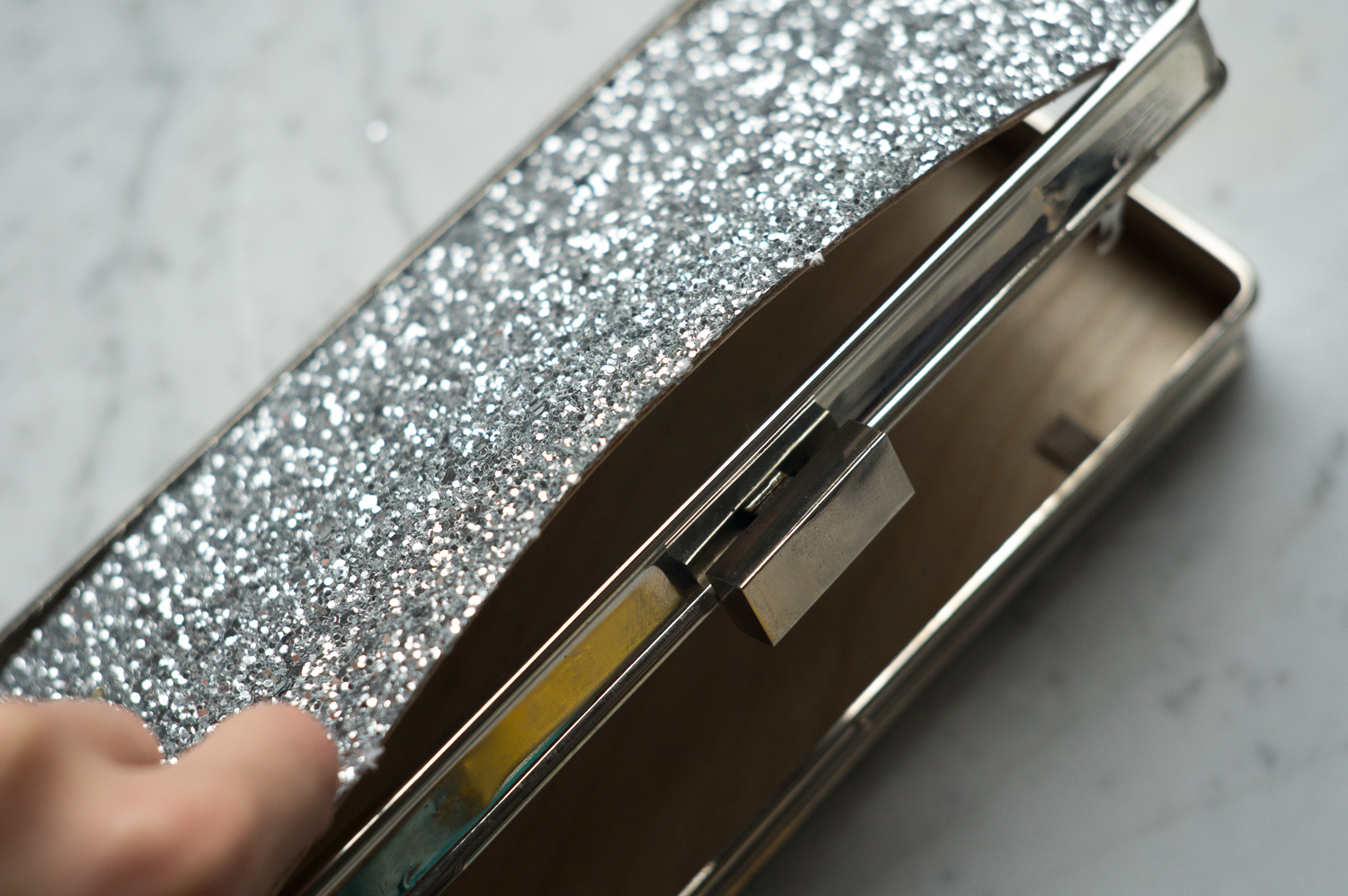 This is where having a very flexible wall is helpful- it makes it much easier to bend and manipulate the piece into place. 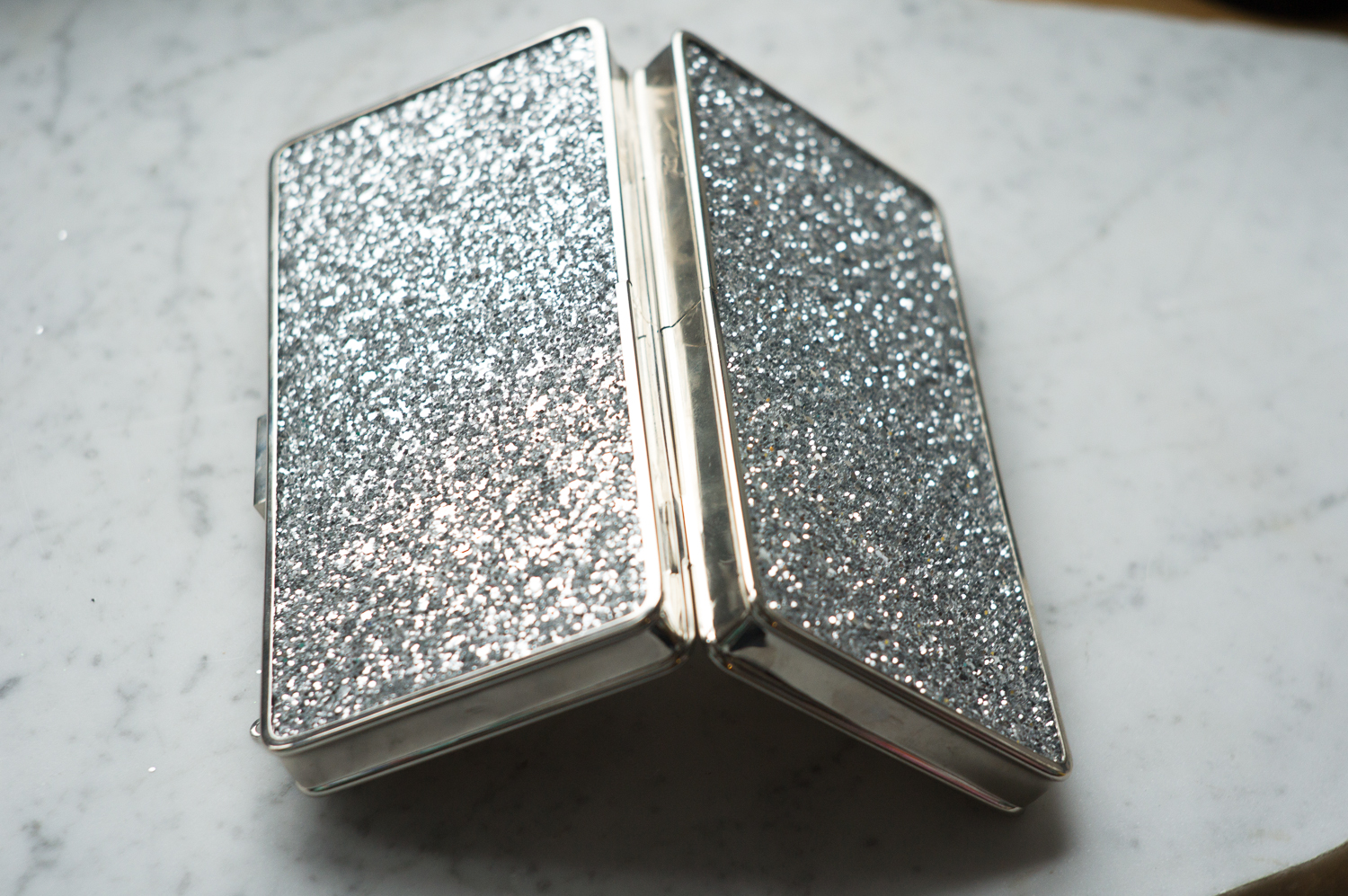 7. The last step is to cover the inside walls with a softer material- a leather or a felt, to at least slightly lessen the chance of your iPhone shattering against one of those metal pieces inside. Simply cut two more rectangles, the same size as the wood and glitter canvas, and glue them to the inner walls. I glued my leather down suede-side out because it was more glamorous that way. 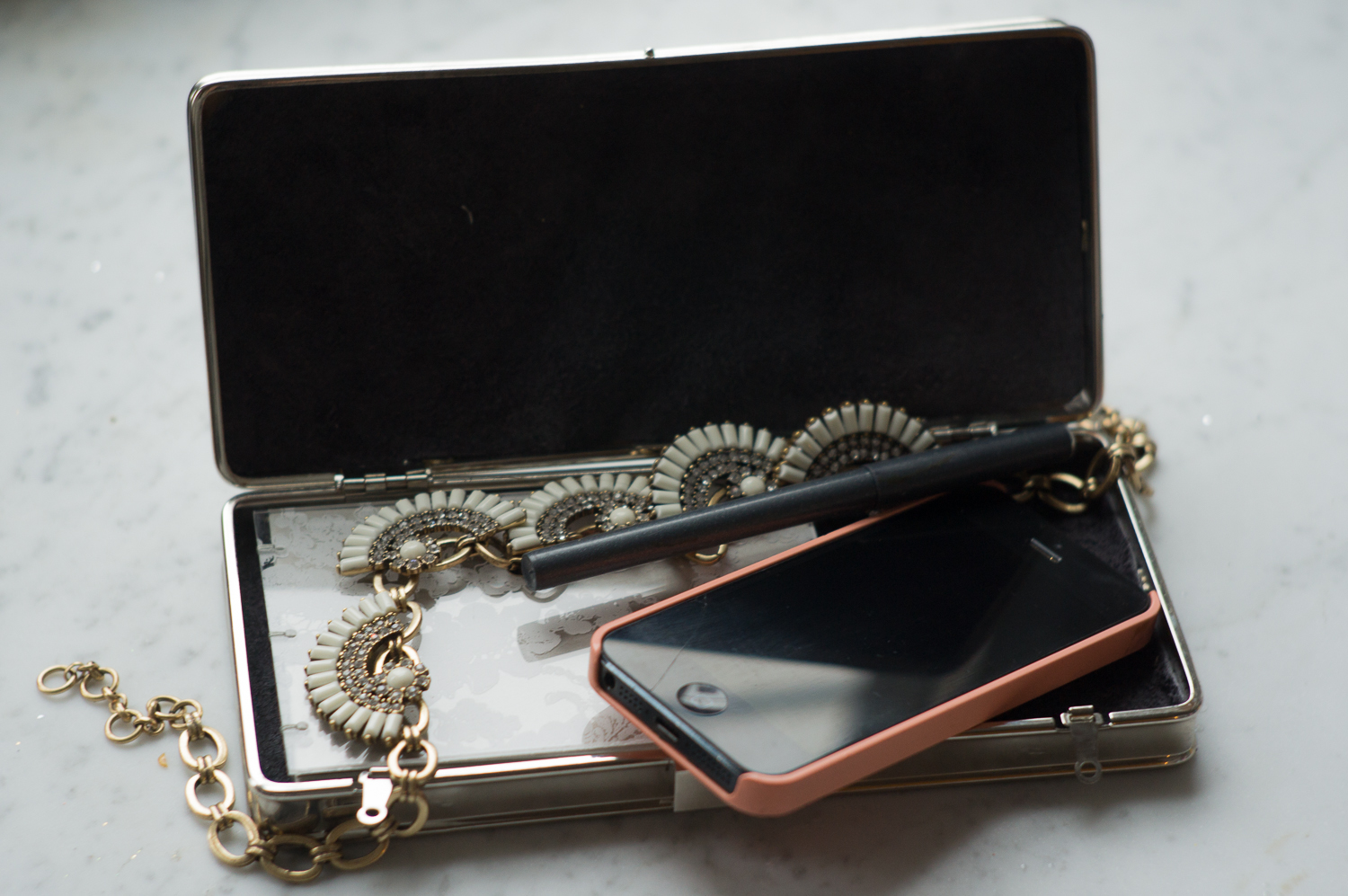 Congrats! You’re a fancy lady now! It’s the perfect size for a cracked iPhone, a chic acrylic notebook for recording all the digits you bout to get with your fly new clutch, a pen to write said digits, and a white necklace for the pen to explode all over and ruin forever.