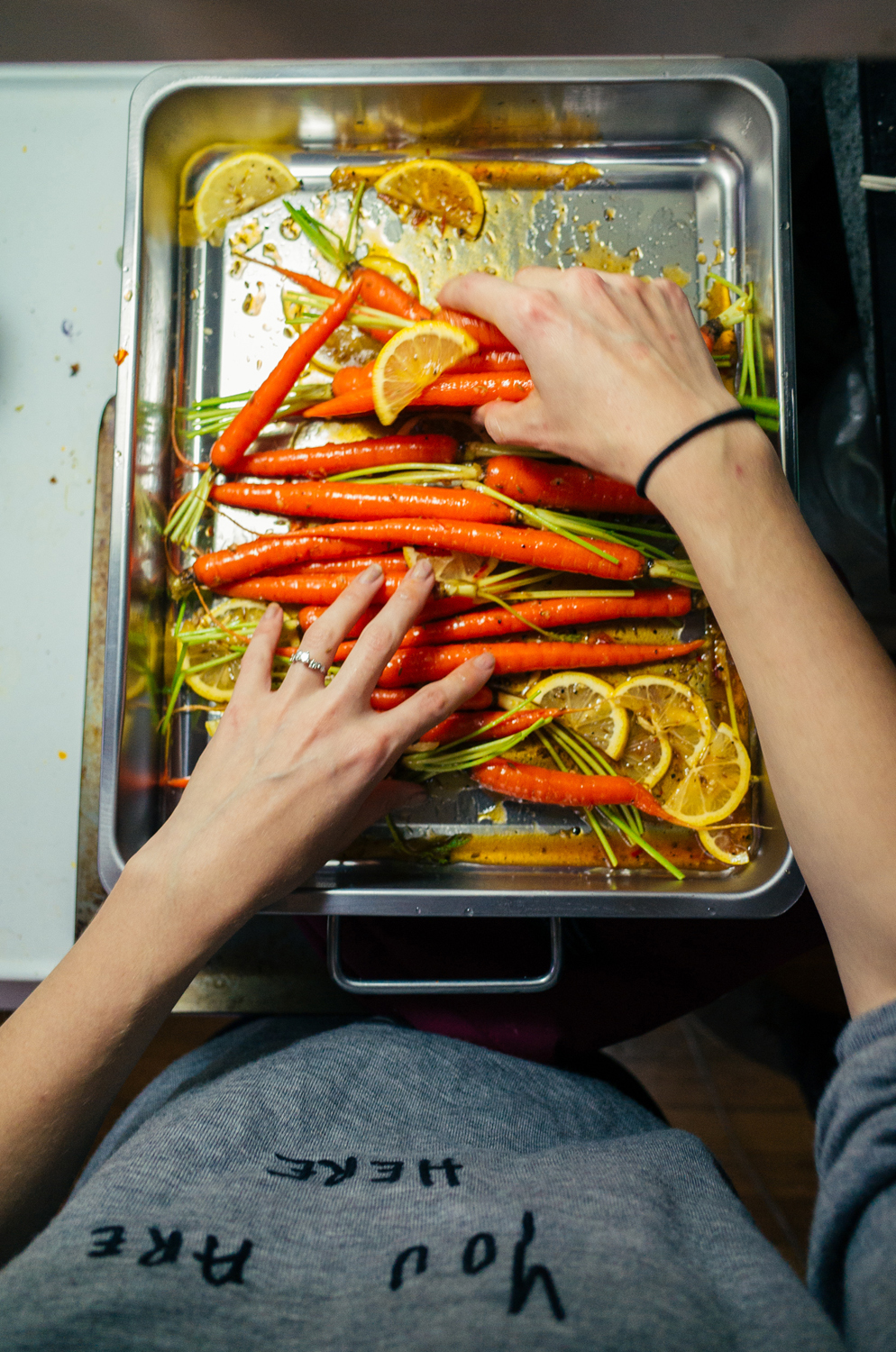 Thanksgiving, that first tile in a long, complicated line of holiday-themed dominoes, has come and gone, and its passing has commenced the rapid fire collapse of sanity and free time that is the holiday season.

I do love the holidays, but since I started Collected Edition, November and December have become… somewhat more complicated. Turns out, custom maps make great holiday gifts, so I do a pretty good trade this time of year. For that, I’m immensely thankful, but it definitely cuts into my ice cream and reality TV time. It also makes going home to Milwaukee for Thanksgiving a logistical impossibility.

So the past several years, Nick and I have floated around- we’ve had a Thanksgiving meal consisting solely of macarons and baguettes in Paris; we’ve had a beautiful New England Thanksgiving at a farm in Connecticut with family; we’ve had a friendsgiving in New Jersey. This year, we decided to stay closer to home, and about 10 days before the big day, finally decided we were going to cook our own Thanksgiving feast. We had hemmed and hawed over what to do- but Nick finally won me over with this sentiment:

It was decided. I reserved a pasture-raised turkey from the Meat Hook, cause we fancy like that, and we brought it home in the front basket of a bike- because we’re not SO fancy that we own a car. Between Nick’s work travel and my holiday production schedule, advance prep wasn’t going to be our style this year, but we managed to transform our apartment from “hellhole” to “acceptable” in a single day. We also went to IKEA the night before Thanksgiving because we realized that we’d been sharing a single drinking glass for weeks, having smashed all our others over the past couple years. Although this arrangement worked for us, guests would perhaps not be as amenable to a communal cup, and I wasn’t sure I’d be able to fully pass it off as a metaphor for the spirit of Thanksgiving.

So armed with new glasses, a fancy turkey, and an oven with only a single rack, Nick and I got to cooking. 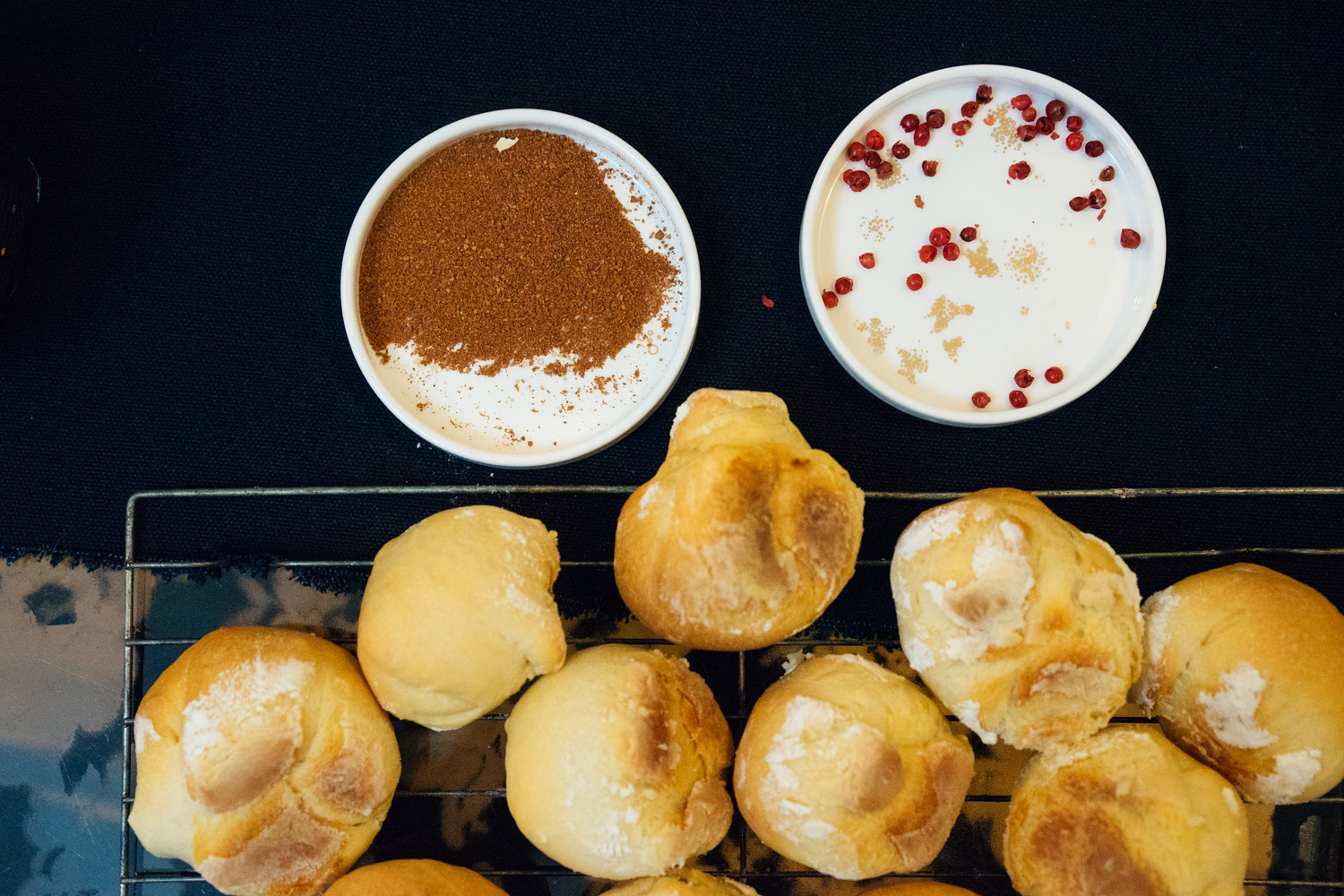 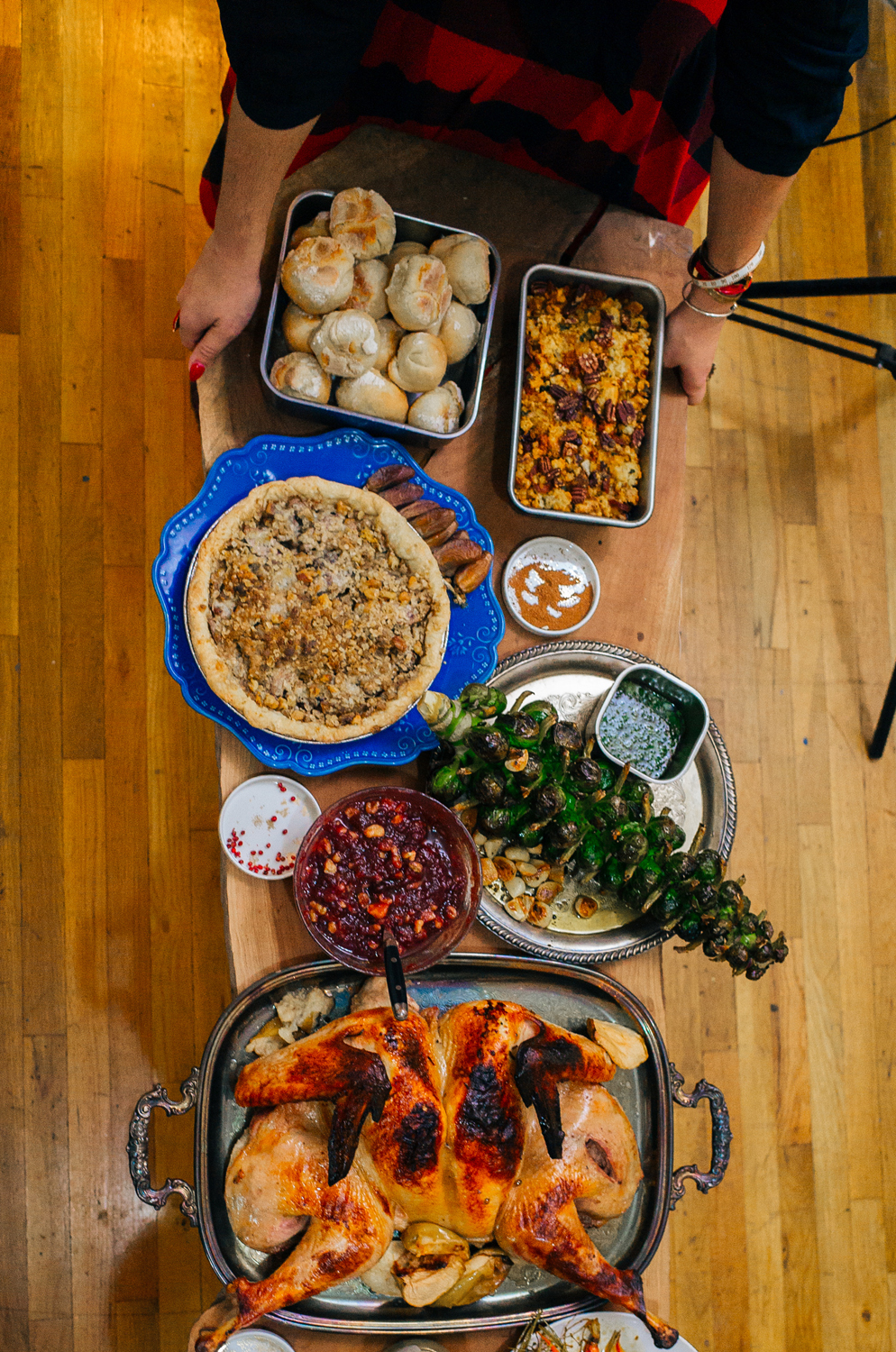 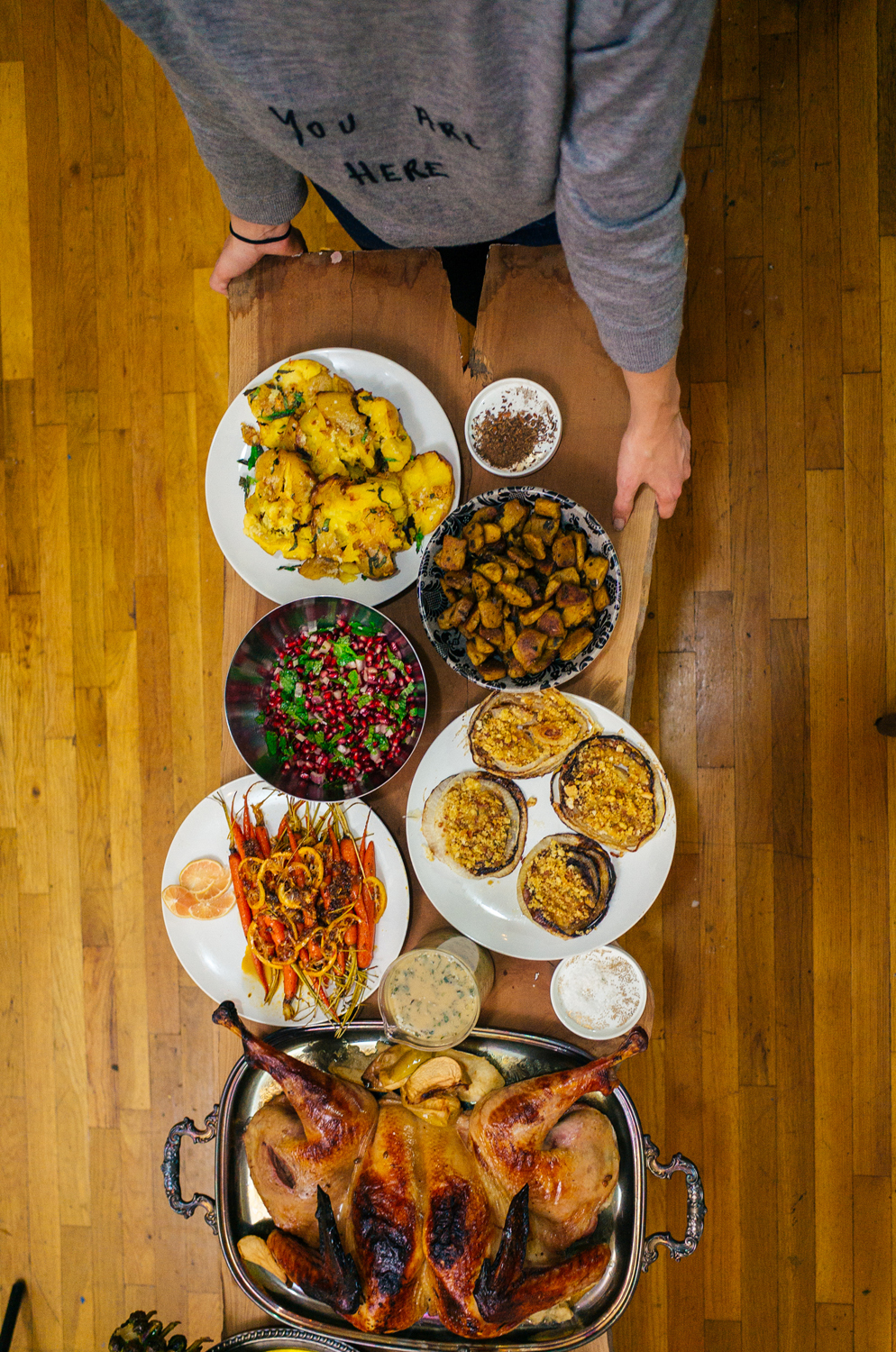 And then after we finished cooking, we loaded all the food onto a wooden board and hoisted it in the air like Viking wenches. 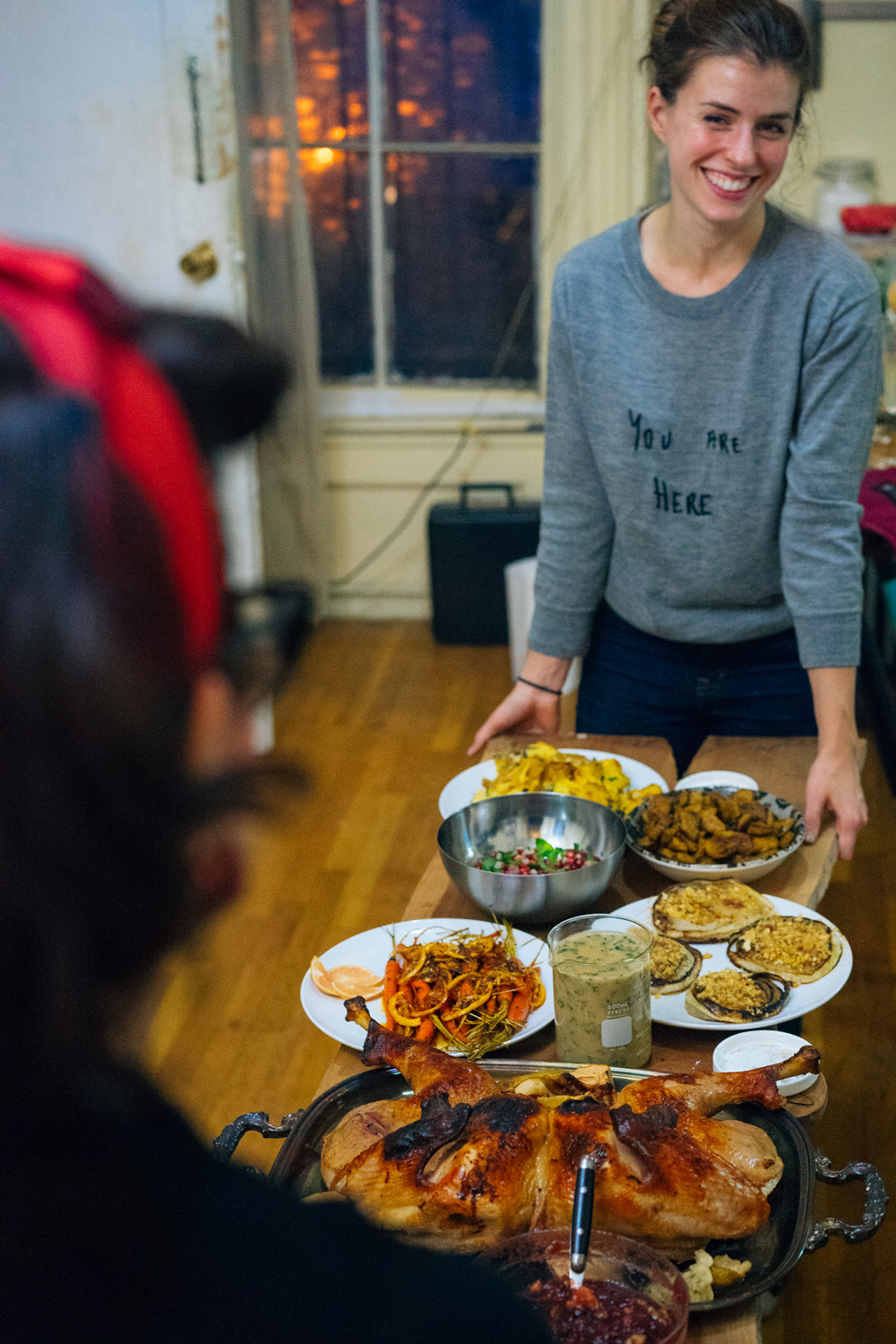 Luckily, we did not drop it. 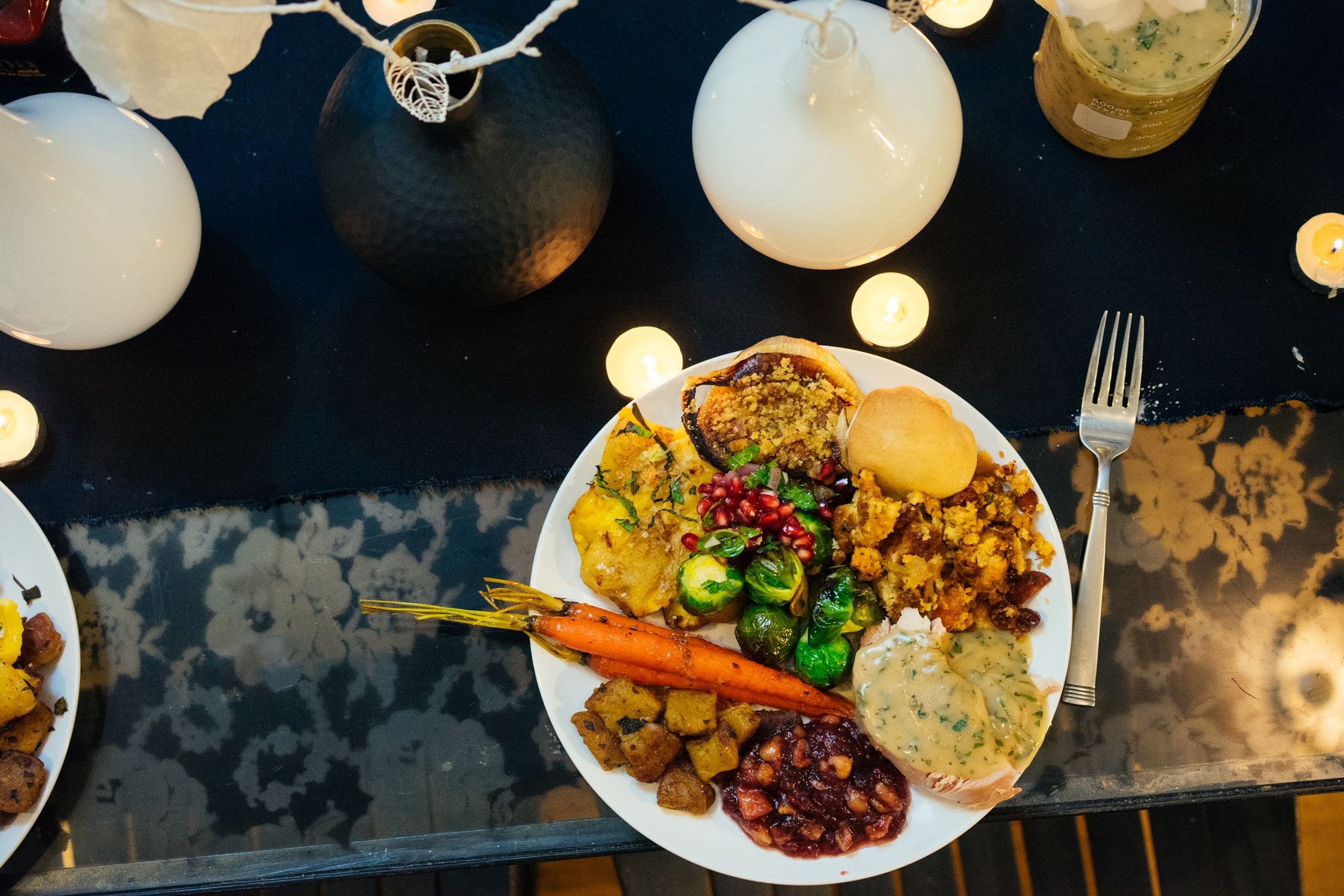 That would have been very sad.

Here’s what we ate (roughly clockwise from upper center):

The sleeper hit of the evening was the potato. I went into Thanksgiving knowing I did not want a plate full of mashes- I LOVE potatoes, but I could live without mashed potatoes. There are few things less appealing to me than a mashed potato bar, and I am well aware that I am in the minority. But my house, my rules. One of my favorite potato dishes is also one of the simplest- Nick’s mom made these tiny roasted potatoes with mint, salt, and garlic once when we were visiting, and I seriously think about them all the time. I wanted to emulate that recipe, but in a more Thanksgiving-y way. I think it succeeded, because Nick said they were the best potatoes he’s ever had. Ever.

All in all, it was an awesome, low-key Thanksgiving. As always, I missed our families acutely- but we cooked great food, had lots of fun, barely yelled at each other, and our apartment is STILL kind of clean. But those are not the things I’m most thankful for this year. I’m thankful that this first foray into the Thanksgiving meal is but the first steps towards building our own family traditions. Maybe in 20 years, we’ll still be putting those smashed potatoes on our holiday table, or maybe it will be something that we cook next year, or the year after that. Maybe we’ll always go to IKEA the night before Thanksgiving. Maybe our future kids will get annoyed and impatient as Dad takes pictures of all the food in sub-optimal lighting. Actually, that will definitely happen.

I try to imagine our holiday tables in 20 years. In my mind, I see familiar faces- our parents, our siblings, our long-time friends. But there are also the question marks- people who have yet to come into our lives, or people who have yet to even be born. It’s impossible to imagine, really- who knows what direction our lives will take. But we’re going to do it together.

And that’s something for which to be truly thankful. 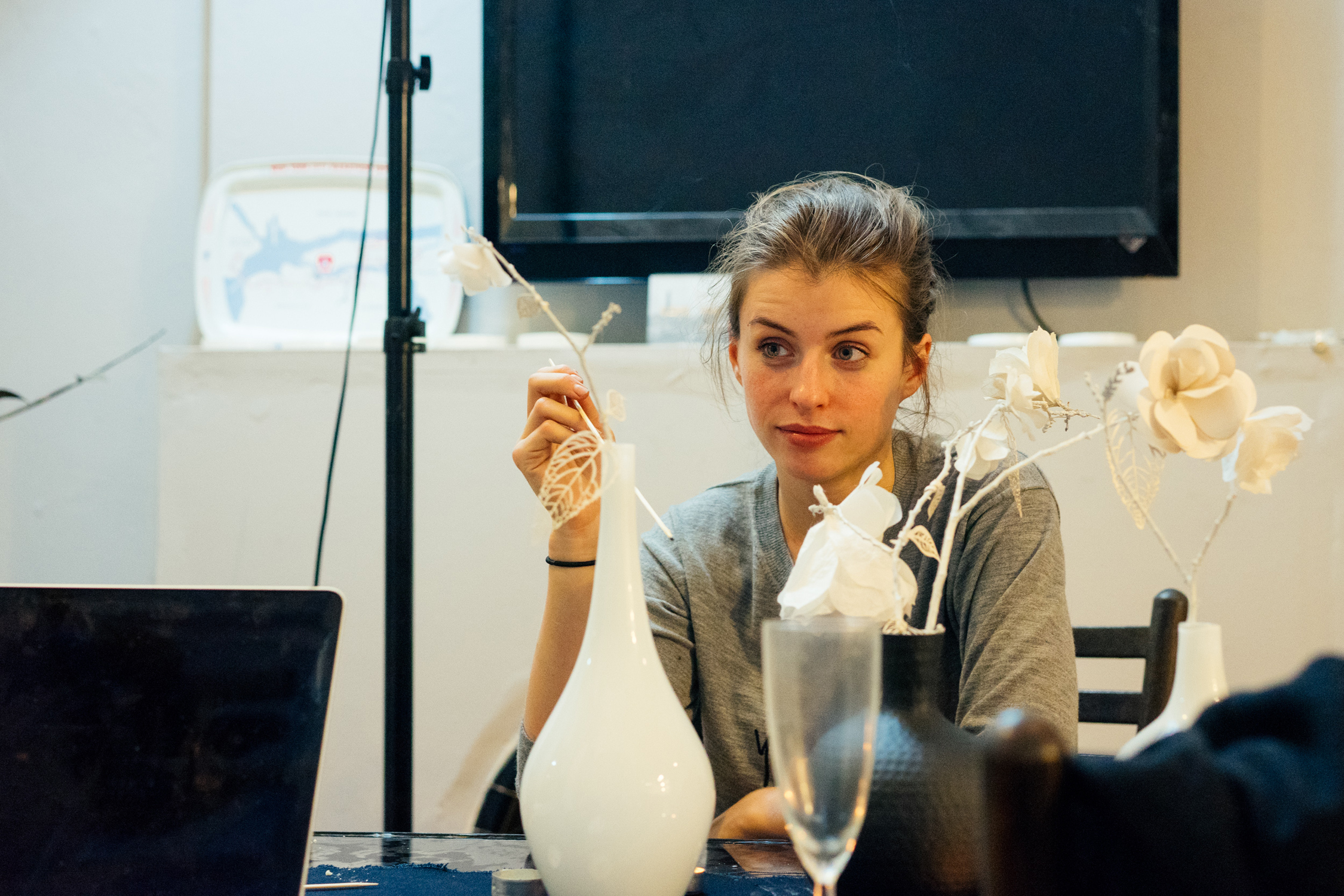 But it’s also ok to be thankful for potatoes:

Smashed potatoes with Mint and Garlic

(pictured in the first Viking-table image, closest to the You Are Here sweater)