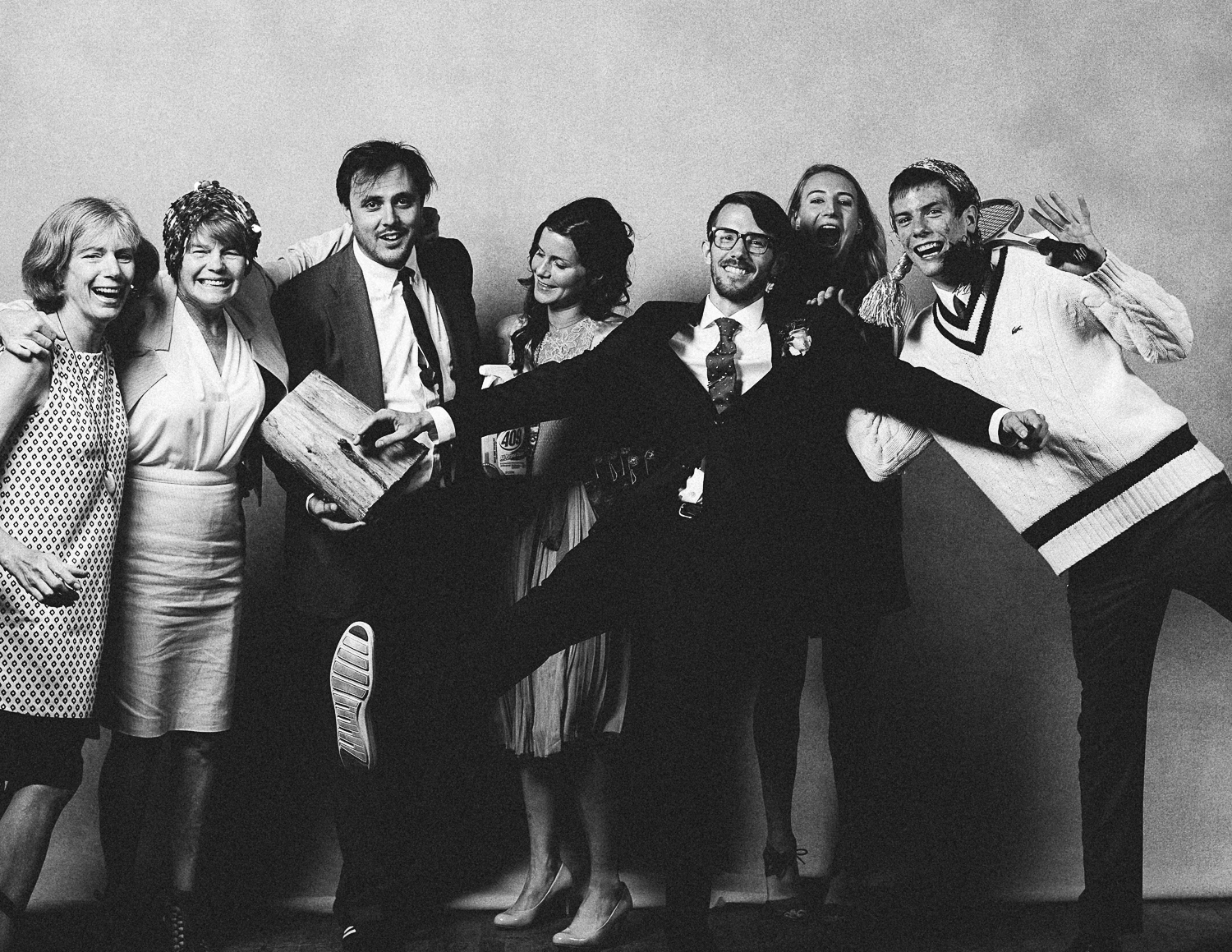 I do. It was the year everyone I knew got a new iMac or laptop (for “college”), fully loaded with Photo Booth. Every graduation party held that summer featured at least an hour of posing in front of the computer, using every possible filter. The lucky few that already had their college email address would then “upload” them to their “Facebook” profiles. Virtual liking was not yet possible, but we real-life loved every second of it. 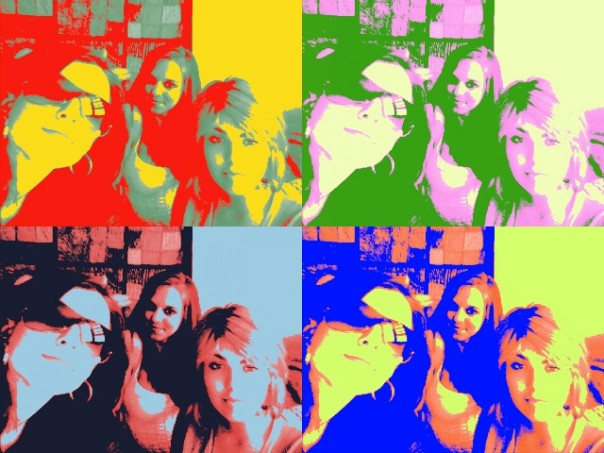 Classic. That’s me on the left, with them hoops.

What did this teach me? People love taking pictures of themselves. It’s simply a fact. Like Narcissus gazing into the depths, we just can’t get enough of ourselves. And so, we decided very early on that we would have a photo booth at our wedding. Perhaps it’s a cliché at this point- but it does give people something to do while waiting around, and it’s a great conversation starter. So, 10/10, would recommend.

There are a ton of services and options available to make a photo booth happen at your wedding. Since I have a pretty serious camera hobbyist in my corner, we decided to DIY it. We wanted to emulate a sort of midcentury studio-shot feel. I’ve always loved editorial fashion work that shows bits of the studio set up- a backdrop stand here, an umbrella or soft box there. A little undone but still really beautiful and cool. I’m super pleased with how ours turned out, especially once a little processing was done (b&w especially): 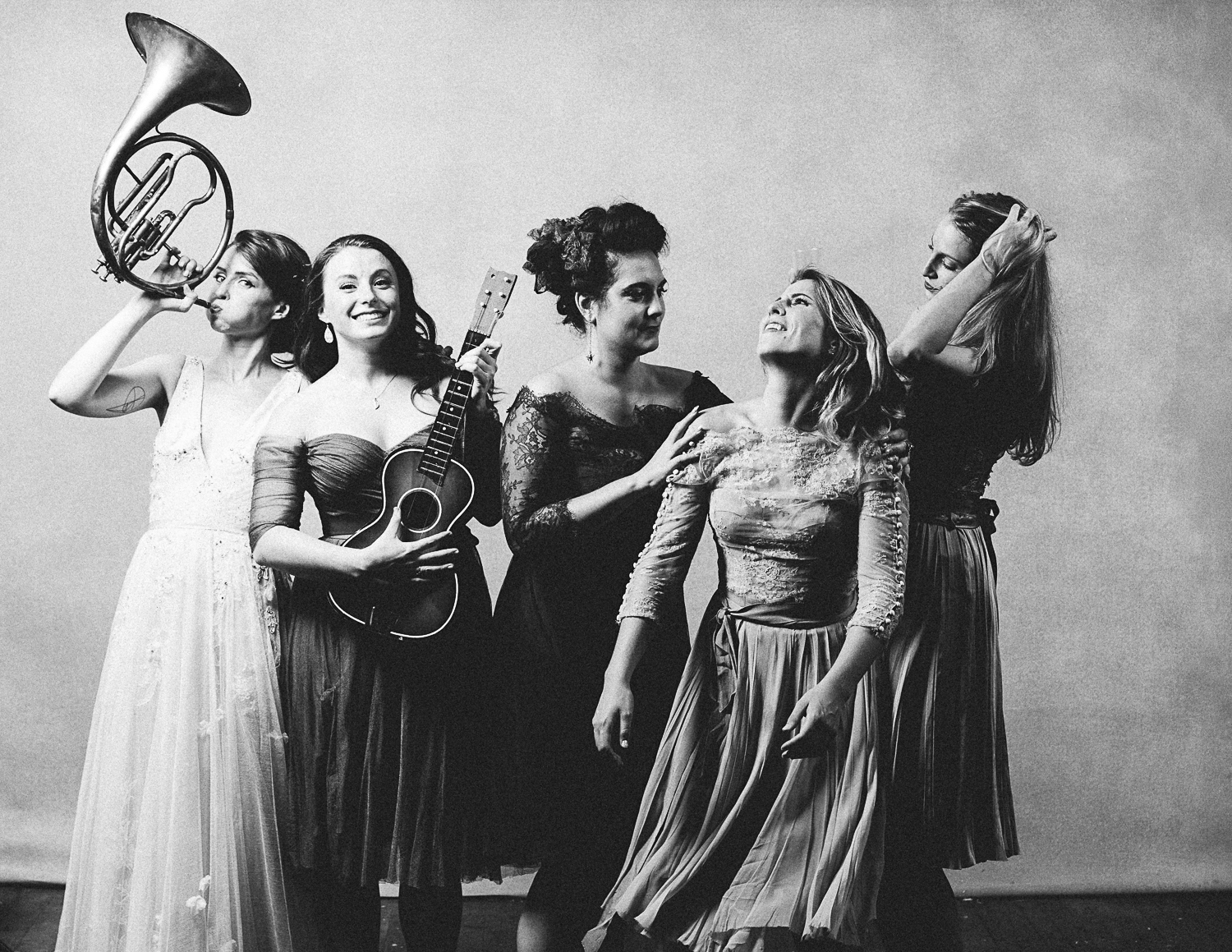 If you want a little more detail on the products- backdrop, camera, props- we used, keep reading.

We used Nick’s Sony camera on a tripod and bought a couple of these remote controls for people to use. Of course, they were all lost within the first hour, resurfacing for brief moments throughout the evening. It didn’t really matter, as there were nearly always people around to press the shutter, if needed.

We have a couple studio lights in our apartment that we use just for lighting (I like a bright, bright, bright room- more operating theater than romantic dinner.). We brought those up with us to the venue and hoped they would suffice. Once plugged in, though, it was quickly apparent that they were no match for the cavernous space. We ended up renting lights from Adorama at the last minute, a process that was surprisingly difficult. We had to provide 10x the information we needed to get a marriage license just to get some goddamn lights. It was a major timesuck and really made Nick really mad, but in the end, we got a strobe and some brighter continuous lights and everyone was happy. 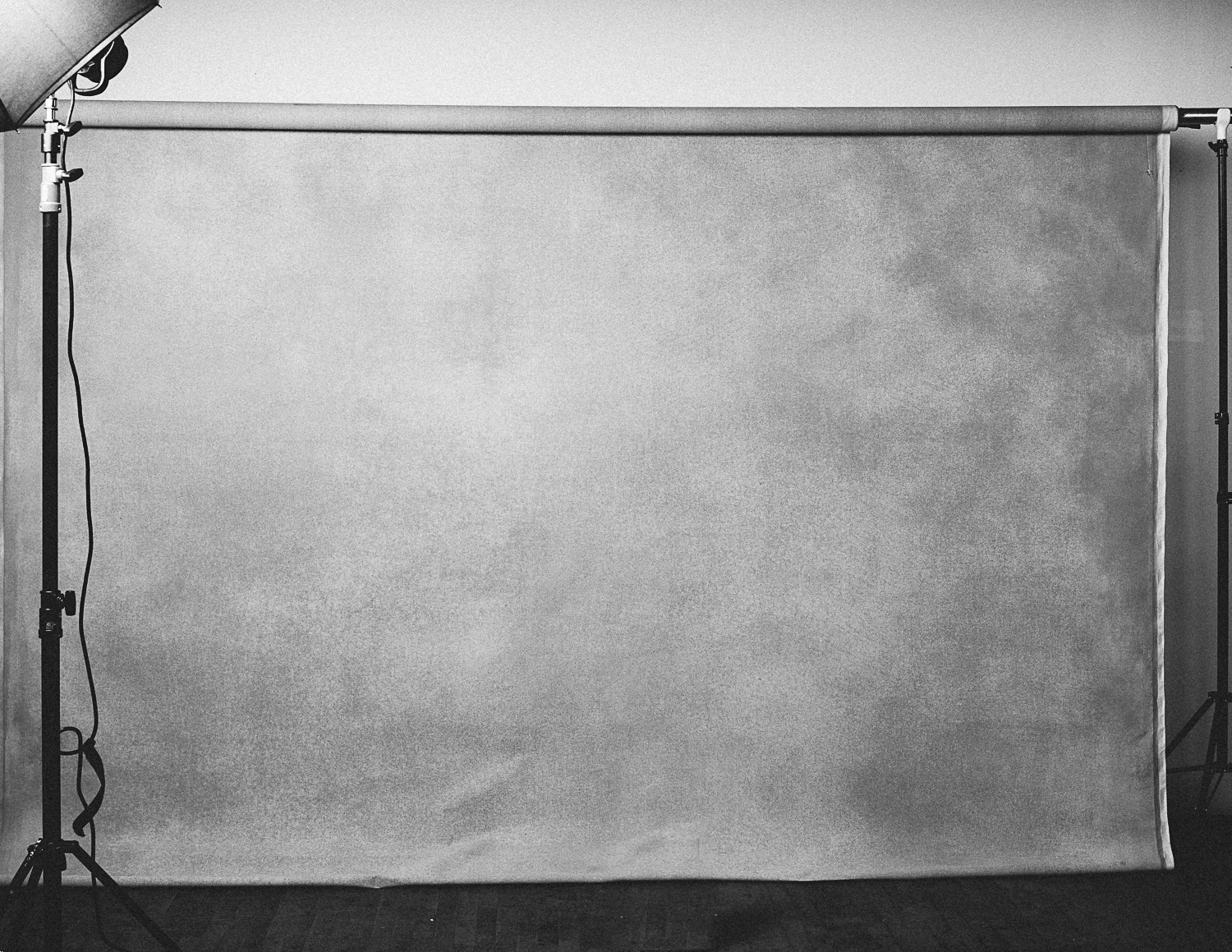 Speaking of last minute, we also left the backdrop for the very end. For weeks leading up to the wedding, we talked about painting our own. We made a half-hearted attempt at dyeing a huge piece of gray muslin in the bath tub, but I think neither of us really made any real progress on it because, er, we just really didn’t want to do it. It’s very, very hard to make any large-scale projects when you live in a small Brooklyn apartment. Even the process of making my dress rendered the living room, well, quite unlivable. 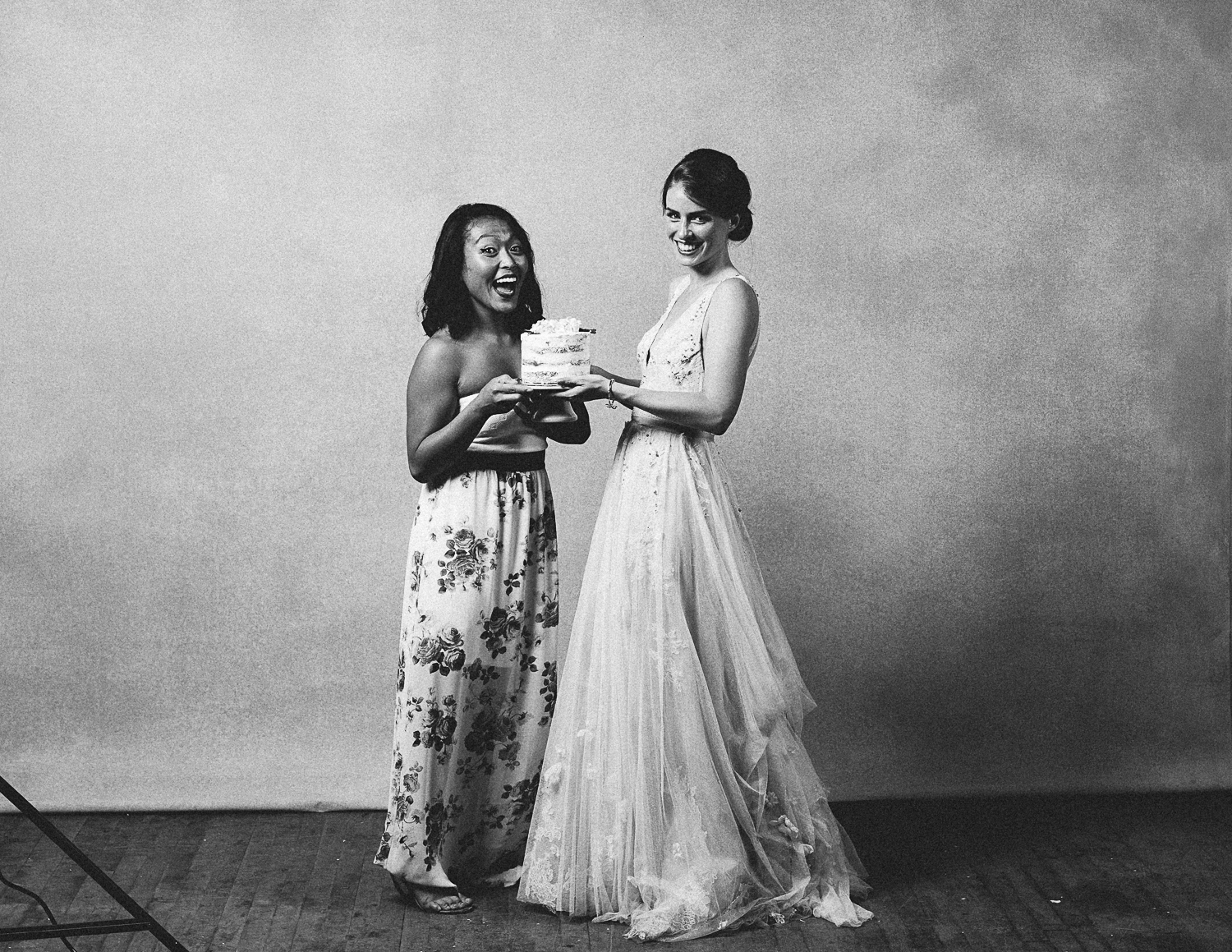 So we put off the backdrop another month, another week, another day, until finally, I suggested we just rent one. High-end backdrops aren’t super cheap to rent, but in the end, $300 was absolutely worth saving our sanity. We went with a 12×20″ backdrop from Schmidli, which along with Oliphant, is one of the better-known painted backdrop providers for fashion editorials (think Vogue and Vanity Fair). Worth every penny, especially since we used the backdrop for our formal pre-wedding portraits with family and wedding party as well. And I guarantee you, if we had made our own, it would have looked like garbage.

One note- backdrop rentals are generally BYOS- Bring Your Own Stand. Nick procured our vintage stands on eBay. 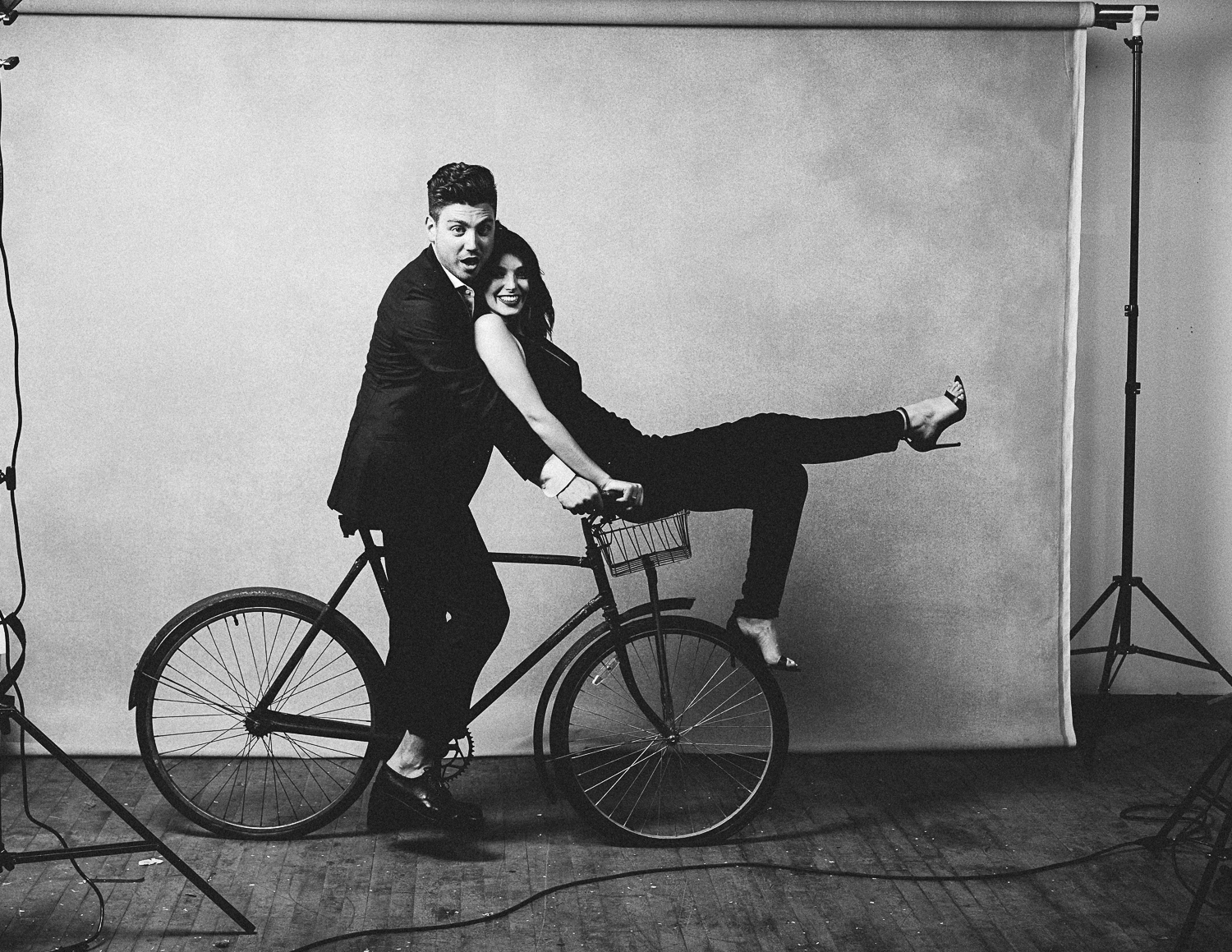 Props are key to any great photo booth- but I have a serious aversion to mustaches on sticks, signs that say “YOLO,” or oversized plastic sunglasses, which seem to be de rigueur for commercial photo booths these days.  Instead, Nick’s mom brought a ton of great vintage sports uniforms, old wigs, and hats. Nick’s best man brought a bike. My parents brought a french horn, golf clubs. It was wild, weird, and super, super fun. 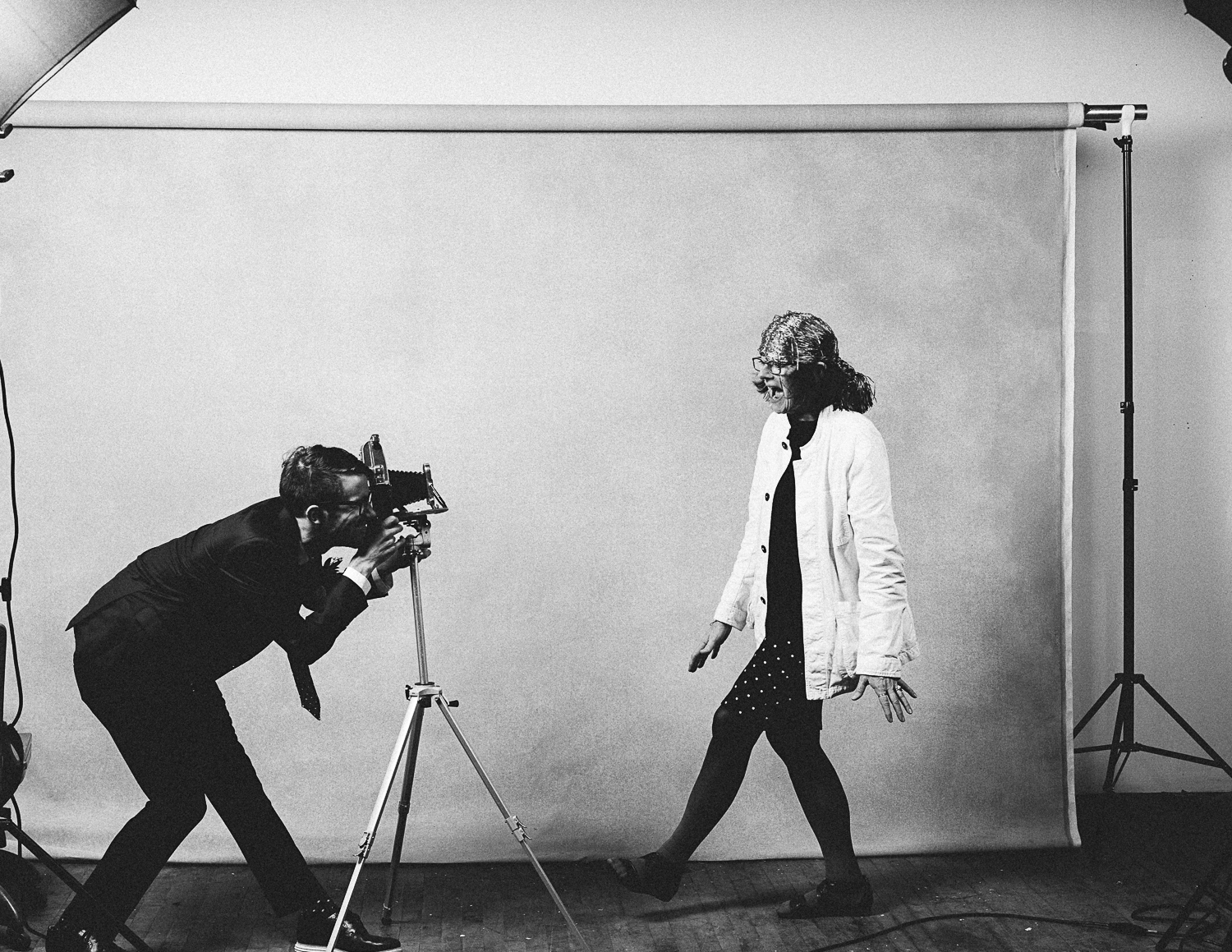 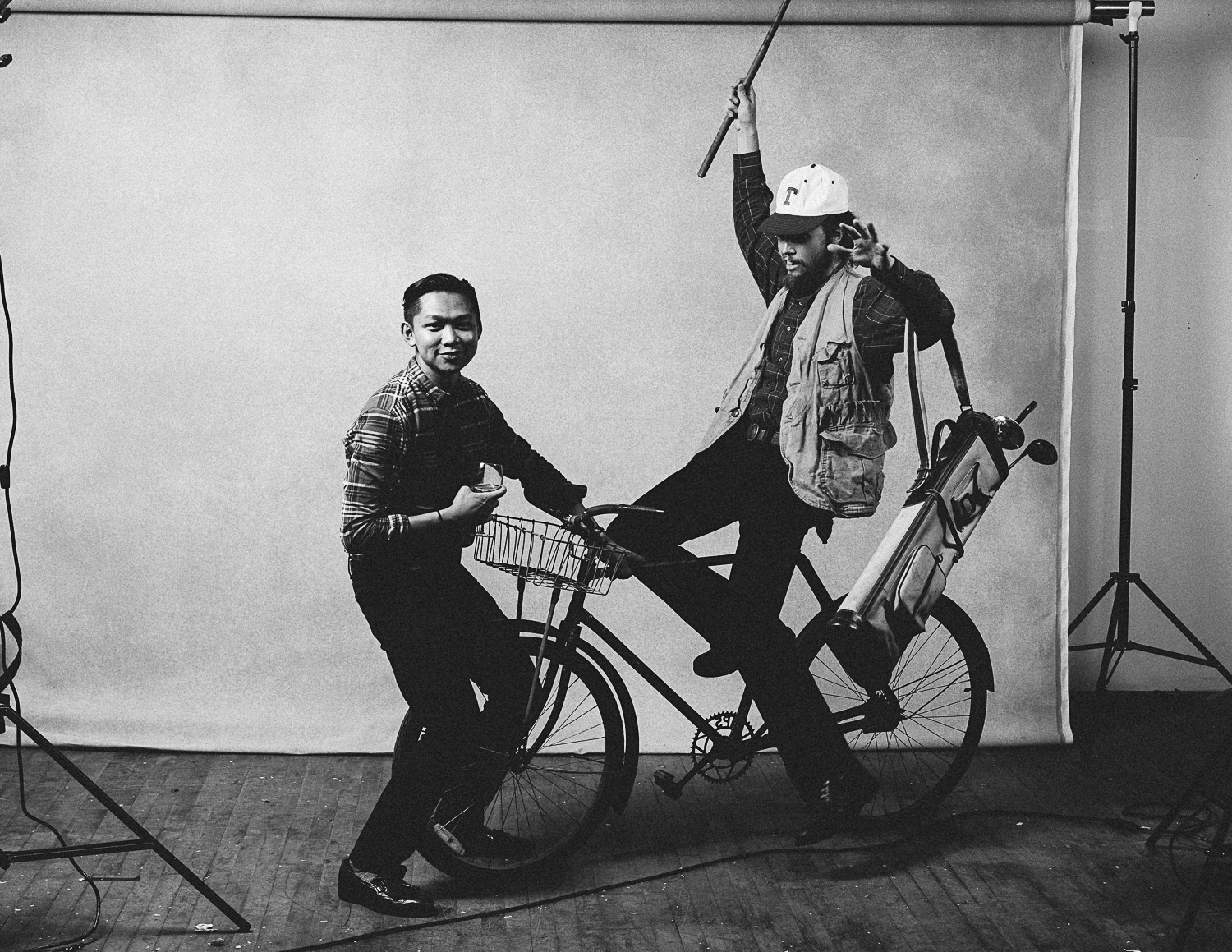 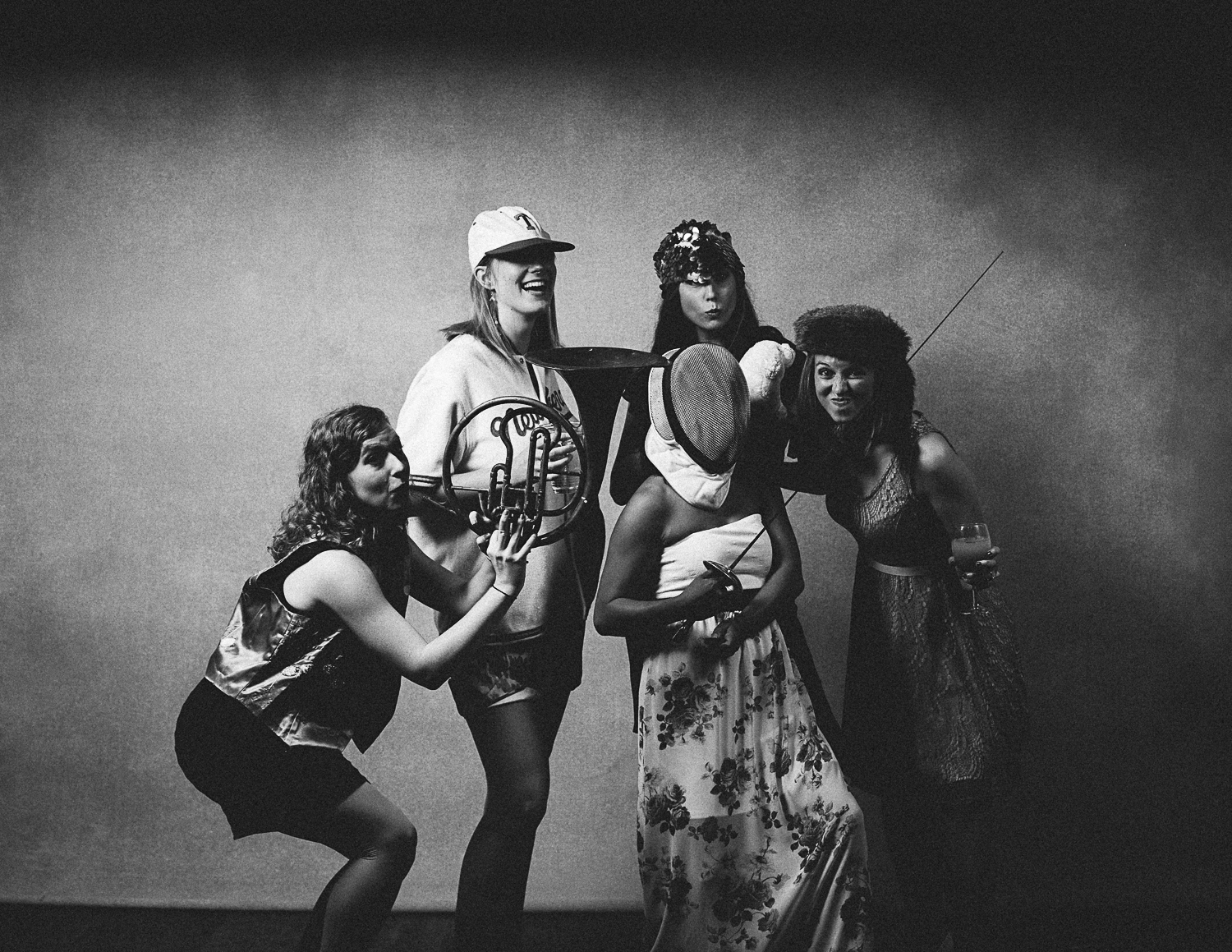 My favorite thing about the pictures is seeing the progression. The first few images are measured, somewhat composed. The floor is clean(ish), the crop is tight. As the party goes on, the camera gets moved and the lighting changes. Props from other people are left behind in pictures. Bits of white confetti start to litter the floor. The cords are all over the place. Hair is messy, suits are rumpled. Shirts start to get unbuttoned. 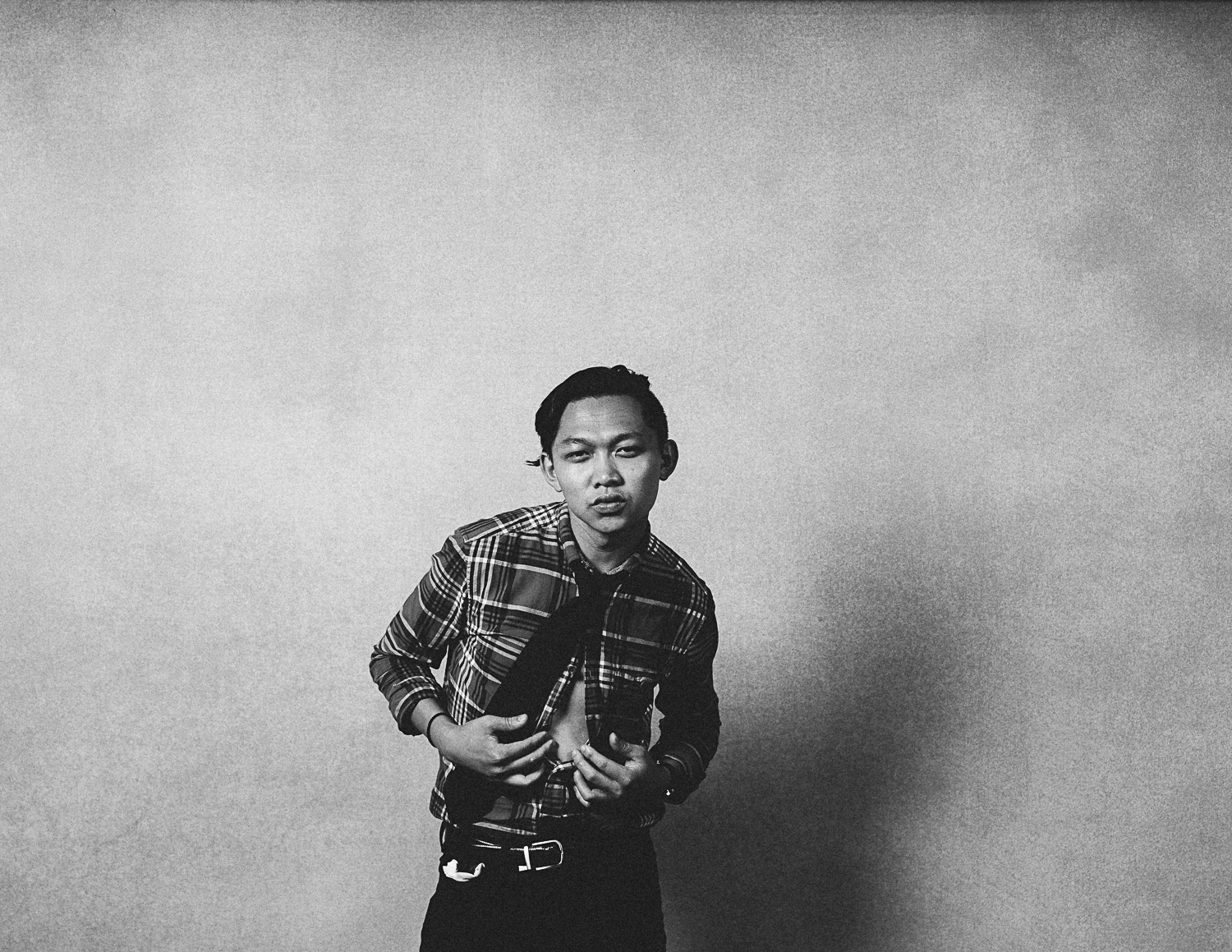 People had fun. And that’s the point. 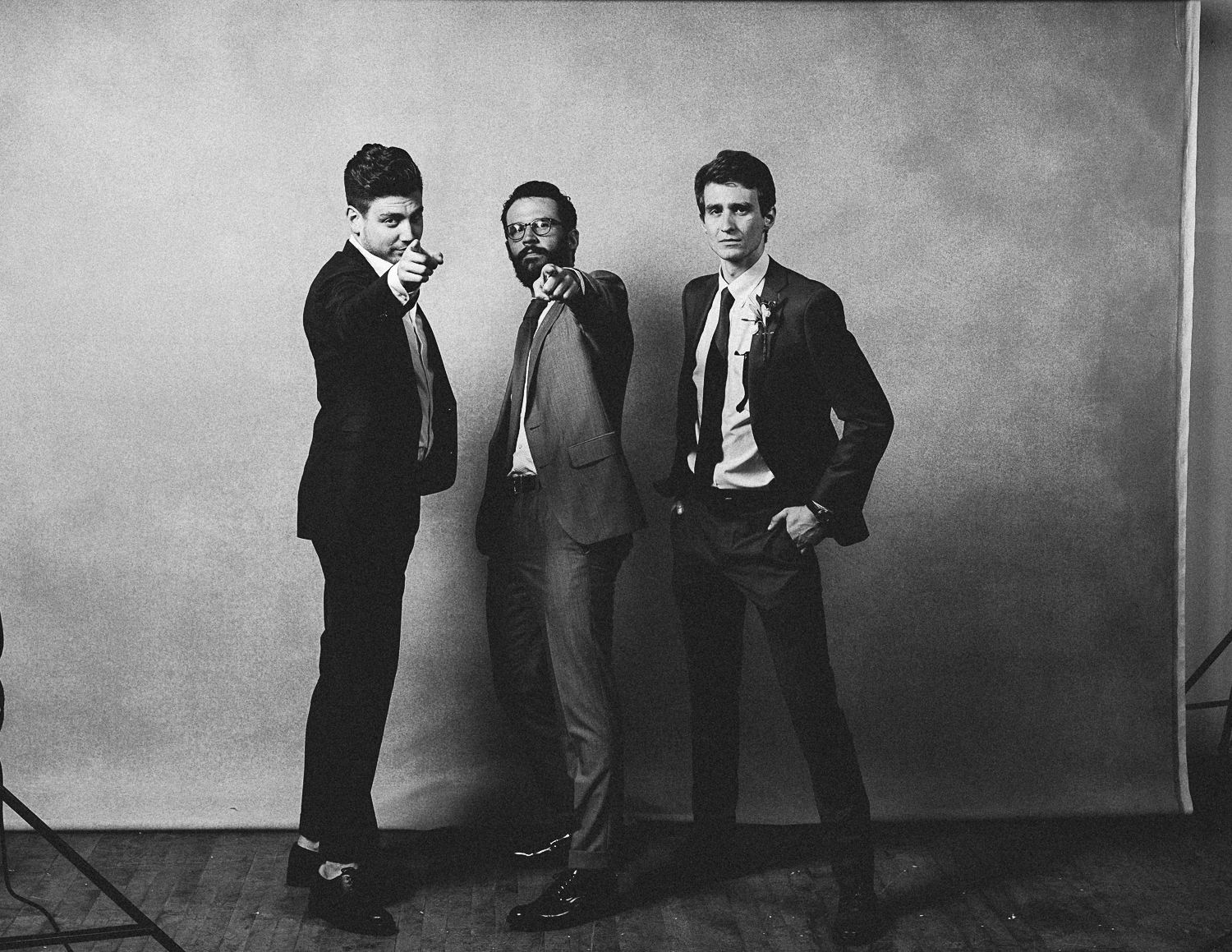 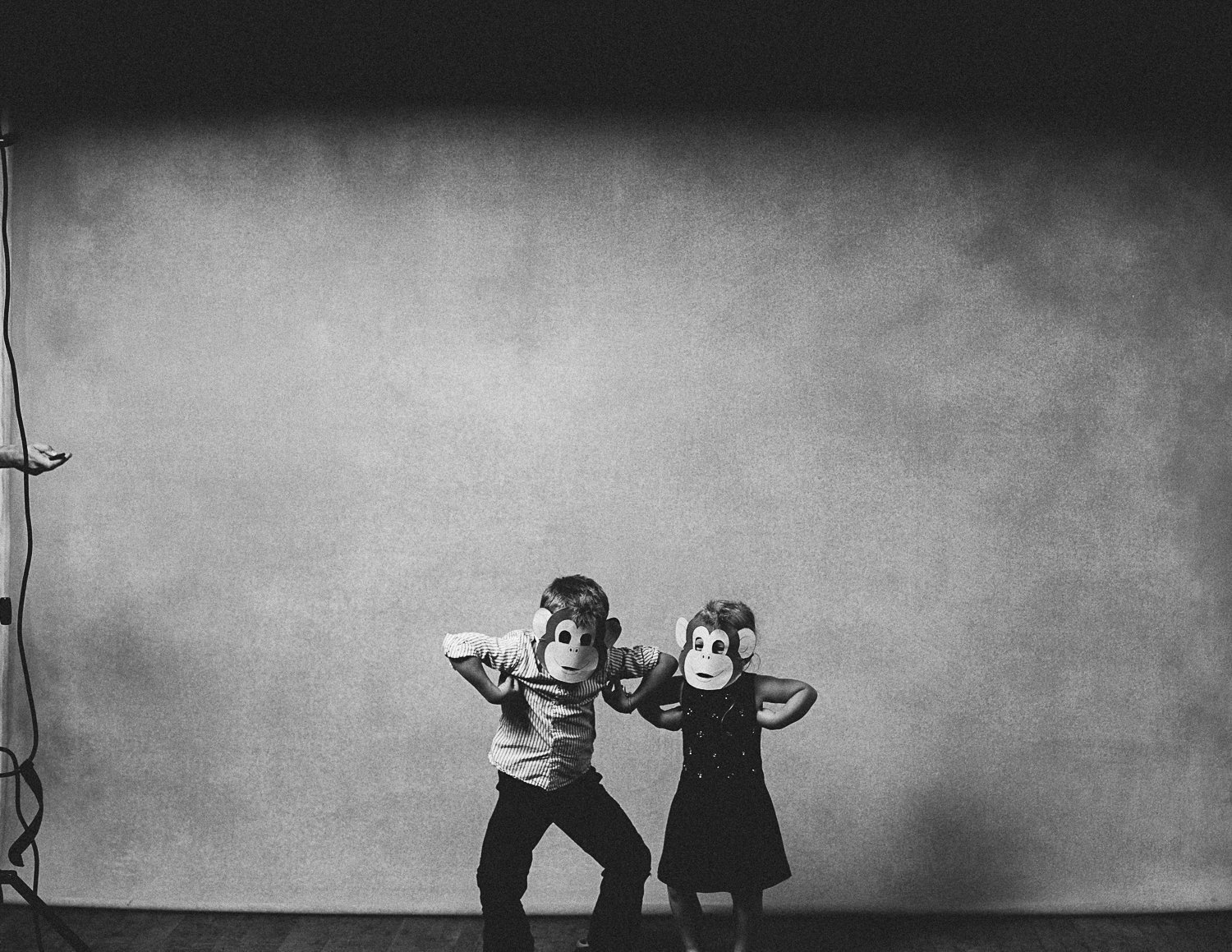