Do Me A Favor 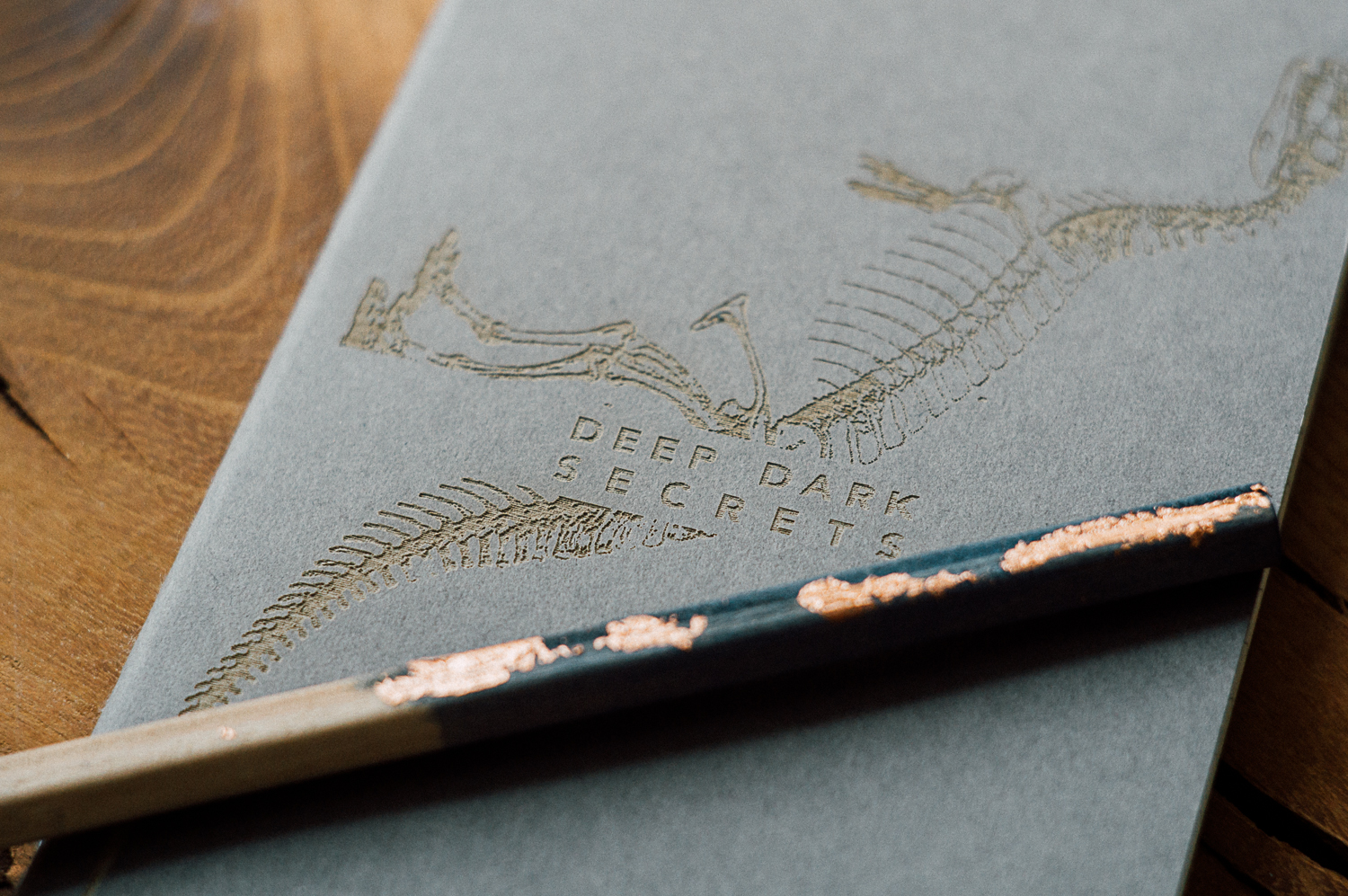 Previously, we thought about going the edible route- a little cookie, a vial of salt, something like that- but thought better of it when we thought about how much food we were about to force down our guests’ gullets. I thought about a little plant or a tiny succulent- but that’s a pain in the a** to, first, remember to bring home, and two, carry home on a plane or train. Annoying. I suddenly felt very jealous of pre-Pinterest-era brides- all you had to do was print your name on some matches and call it a day. I also didn’t want to do something that cause me major distress to see left behind on the tables at the end of the night- as so frequently is the case. So it had to be cheap, cute, and preferably, easy.

I was mulling over our options right about the time I was also scouring the internet for cute thank you cards. If there’s a recipe for financial ruin for little old Kash, it’s a laptop and paper-goods online retail. I just love cards. And notebooks. And all these places just had the cutest little tiny notebooks. I wanted to buy all of them.

So I came up with the idea to include little notebooks and pencils in with our programs, as sort of a favor-ish thing. It was fitting- Nick and I both have a tendency to carry around a few sketchbooks at most time. It fit the “cheap and cute” criteria. And I hoped that, by using a tool already in the KW-wheelhouse- our laser cutter- they would be easy, too. When I came up with the idea and posed it to Nick, he regarded it the way he regarded nearly every idea I came up with in the last 3 months of our engagement- enthusiastically, but a little warily, with some very carefully chosen words. Something about taking on another project. I don’t know- I could hardly hear him through the bride haze. 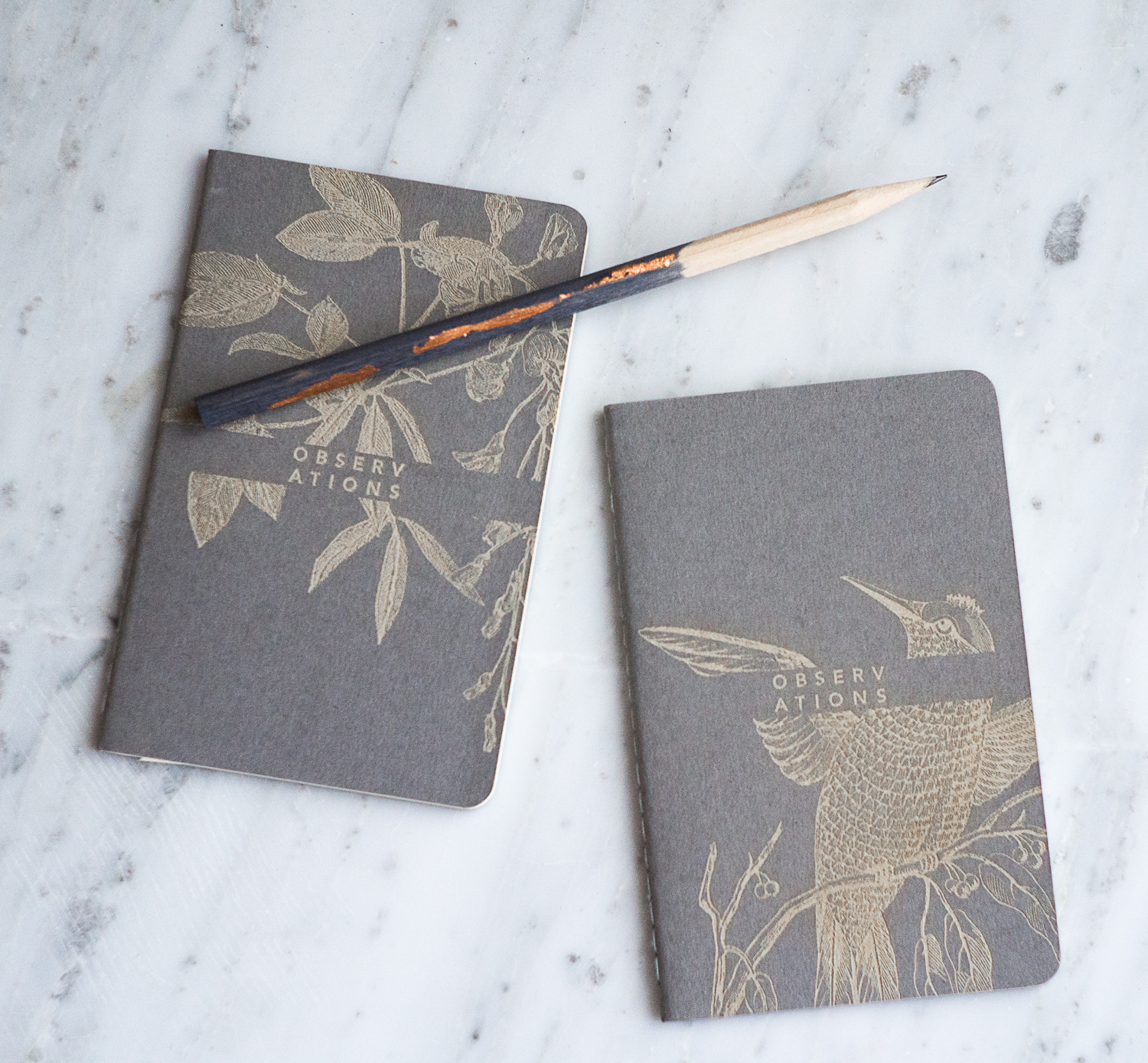 I found these Moleskine pocket notebooks on this British website. They’re $6.00 for a set of 3 now, but they were even a bit cheaper when I got them a few months ago- they ended up being about $1.75ish per notebook. Plus, free shipping. Plus, grey. Hallelujah.

I dicked around with a few different design idea- laser cut words, laser cut geometric patterns, metallic backing paper- before landing on these etched vintage illustration designs. My love for botanical illustration is well documented, so I thought that perhaps they would all feature some sort of flower. But then, I found my desktop folder of anatomical drawings, and I obviously needed to include those. And so, I ended up with about 10 or 12 different designs, from dinosaur skeletons to woodcut birds to medieval sign-language charts. I wish I had photographed them all, but I managed to scrounge up a couple of the leftover ones from the wedding aftermath. 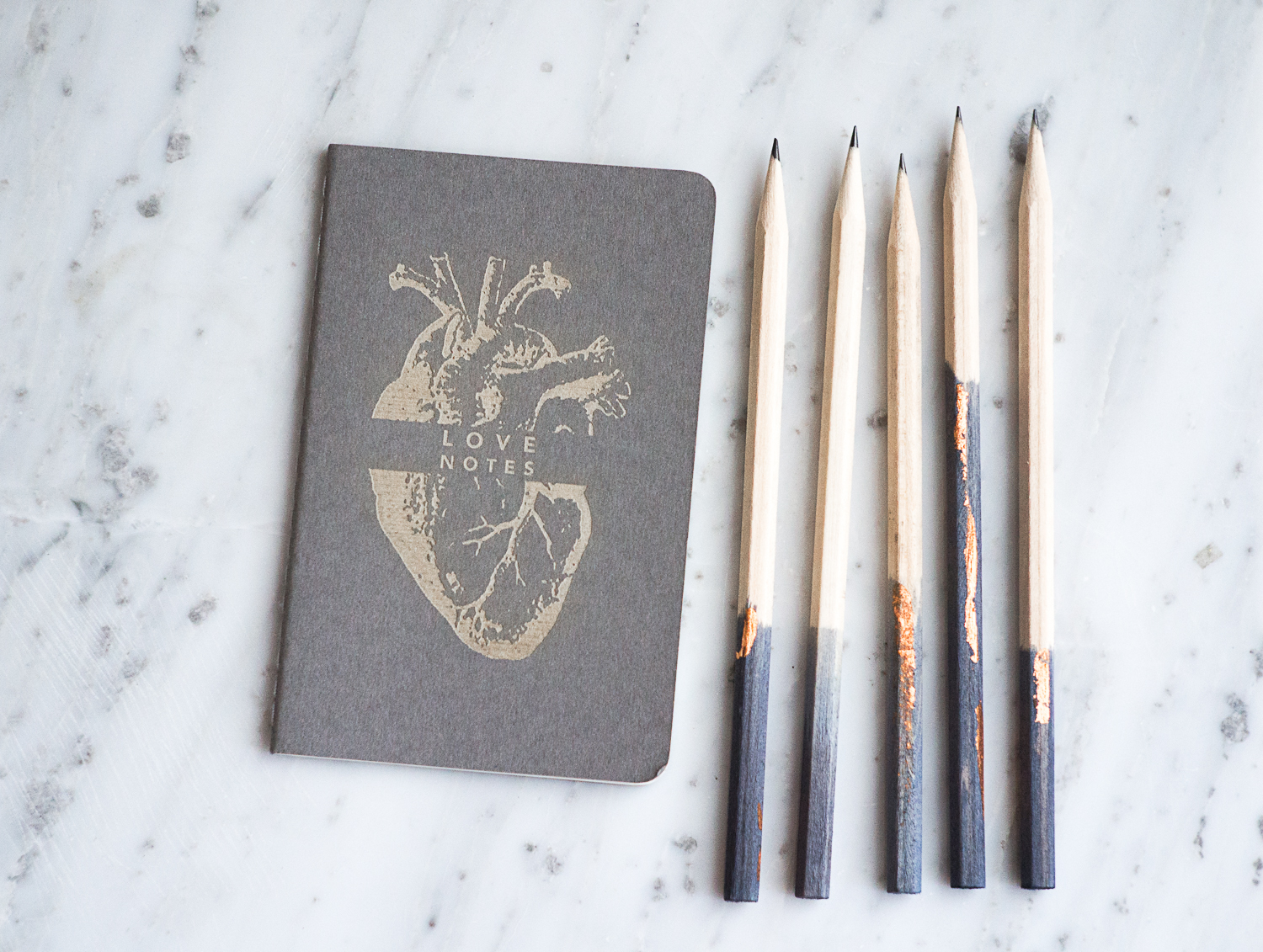 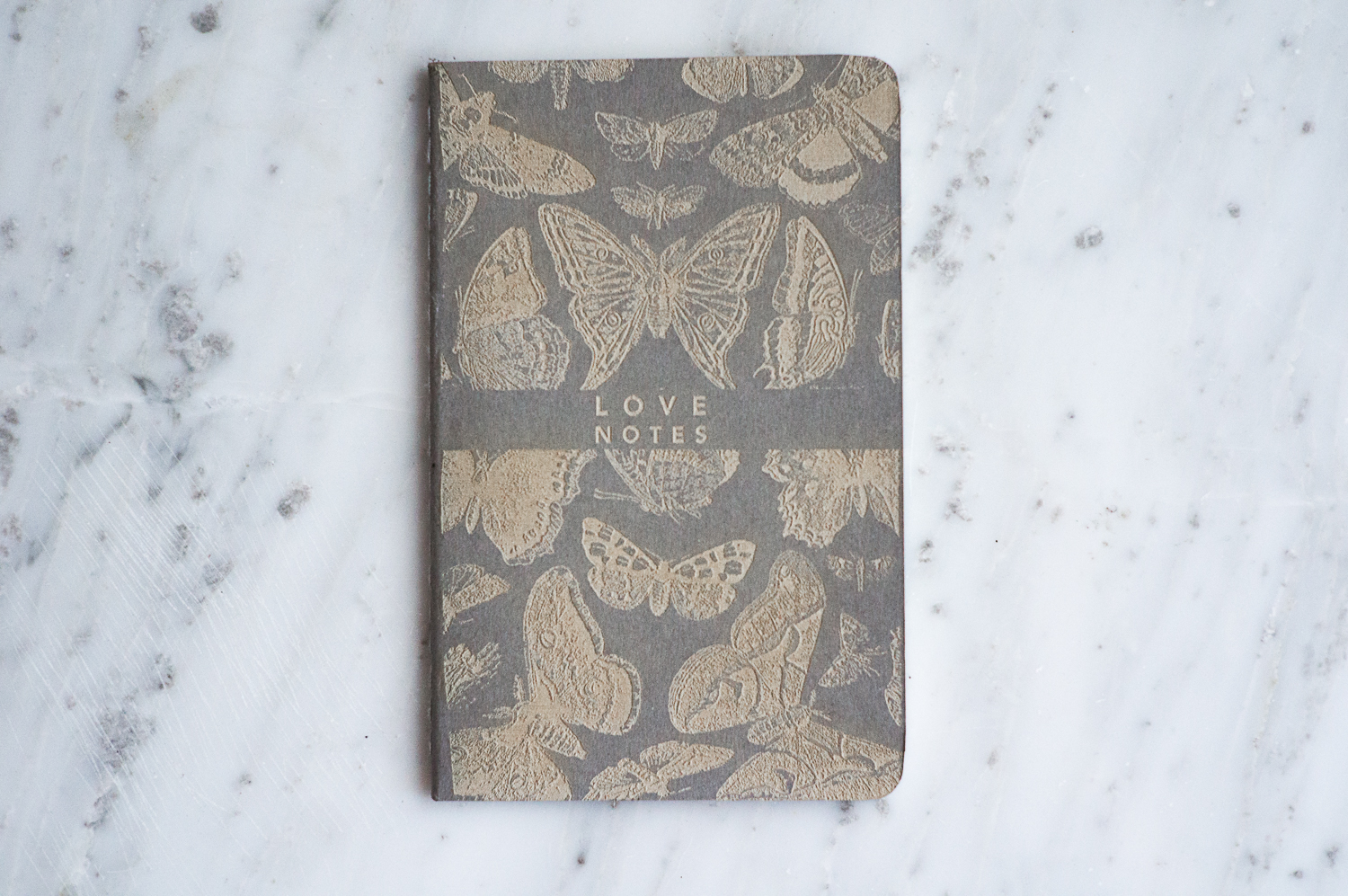 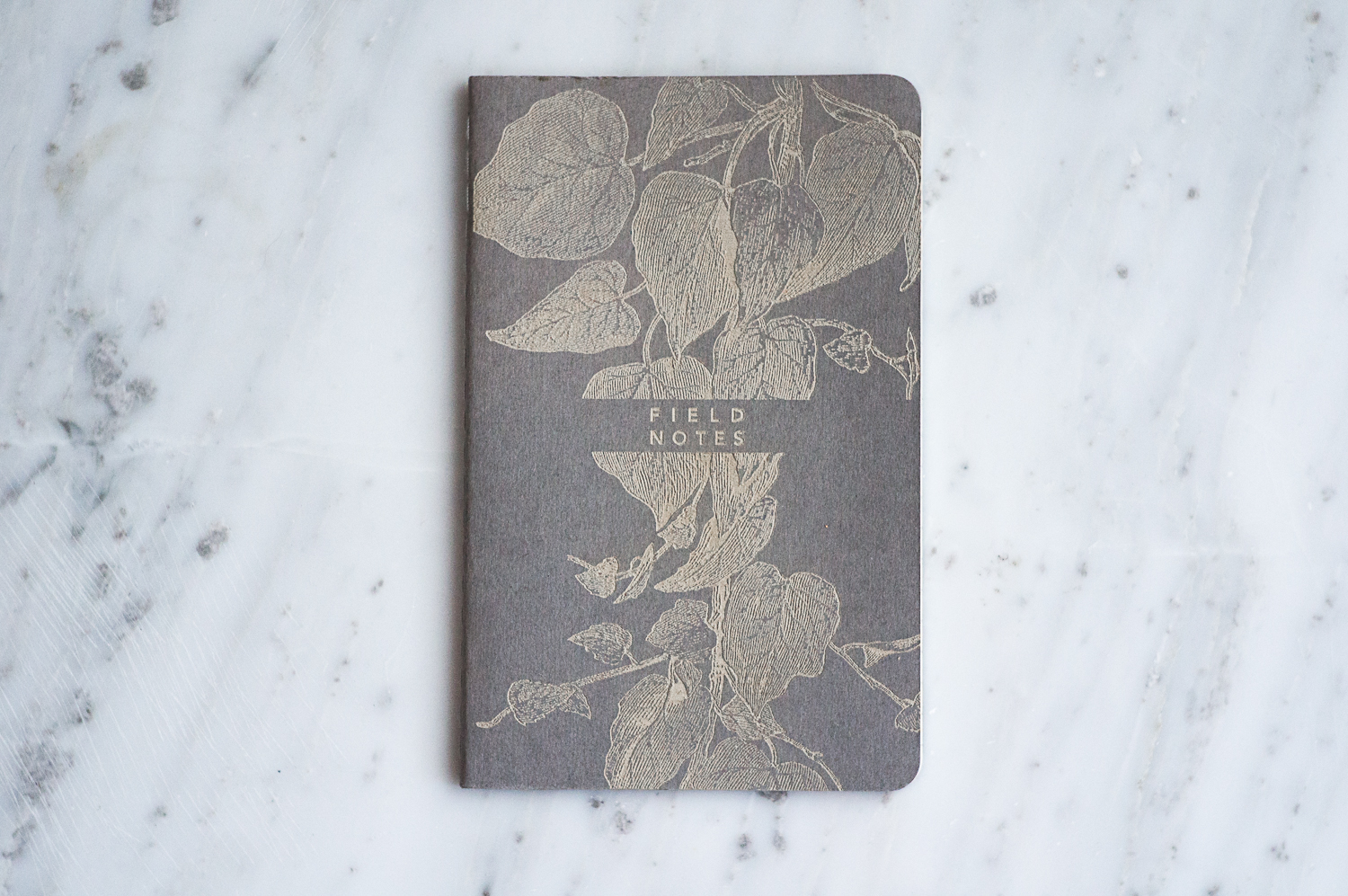 And what’s a notebook without a pencil? I ordered 200 plain wooden pencils- which were harder to find than you might think) from AliExpress. Inspired by the stained wooden dowels and kebab sticks that I use to mix up my fabric dye baths, Nick and I spent an evening dipping the ends of the pencils and drying them in upside-down IKEA utensil holders. They looked cool, but as I inspected them the next morning, the little craft devil on my shoulder whispered into my ear:

“Don’t you think they’d look a little better with some copper leaf?”

Of course, I agreed. The demon had spake the truthe. And so, for the millionth time over the course of this wedding, I pulled out the metallic leaf and got to work. An hour later, I had 100 shiny, bespoke pencils, which is a pretty infuriatingly twee combination of words, and so I apologize. 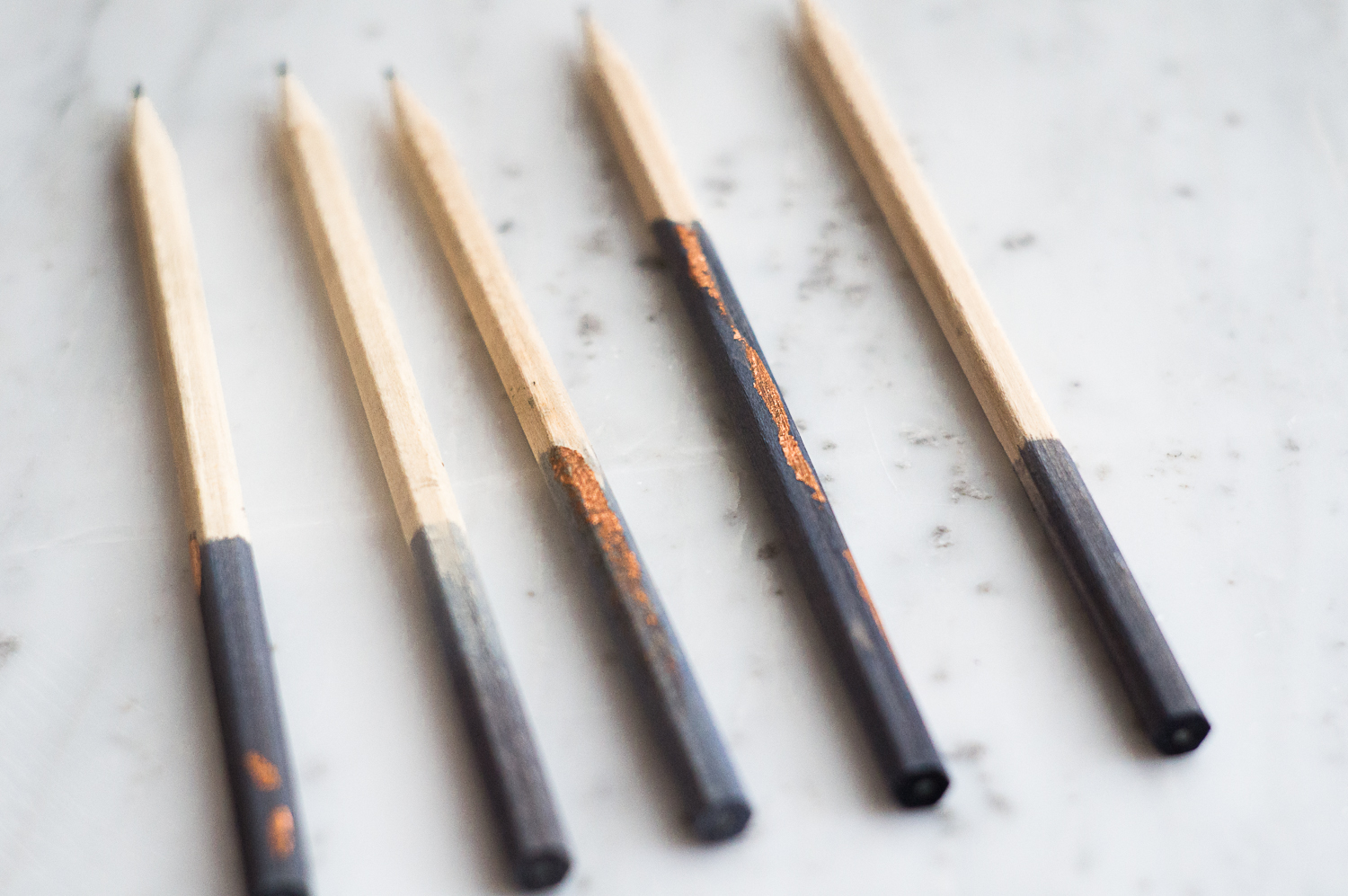 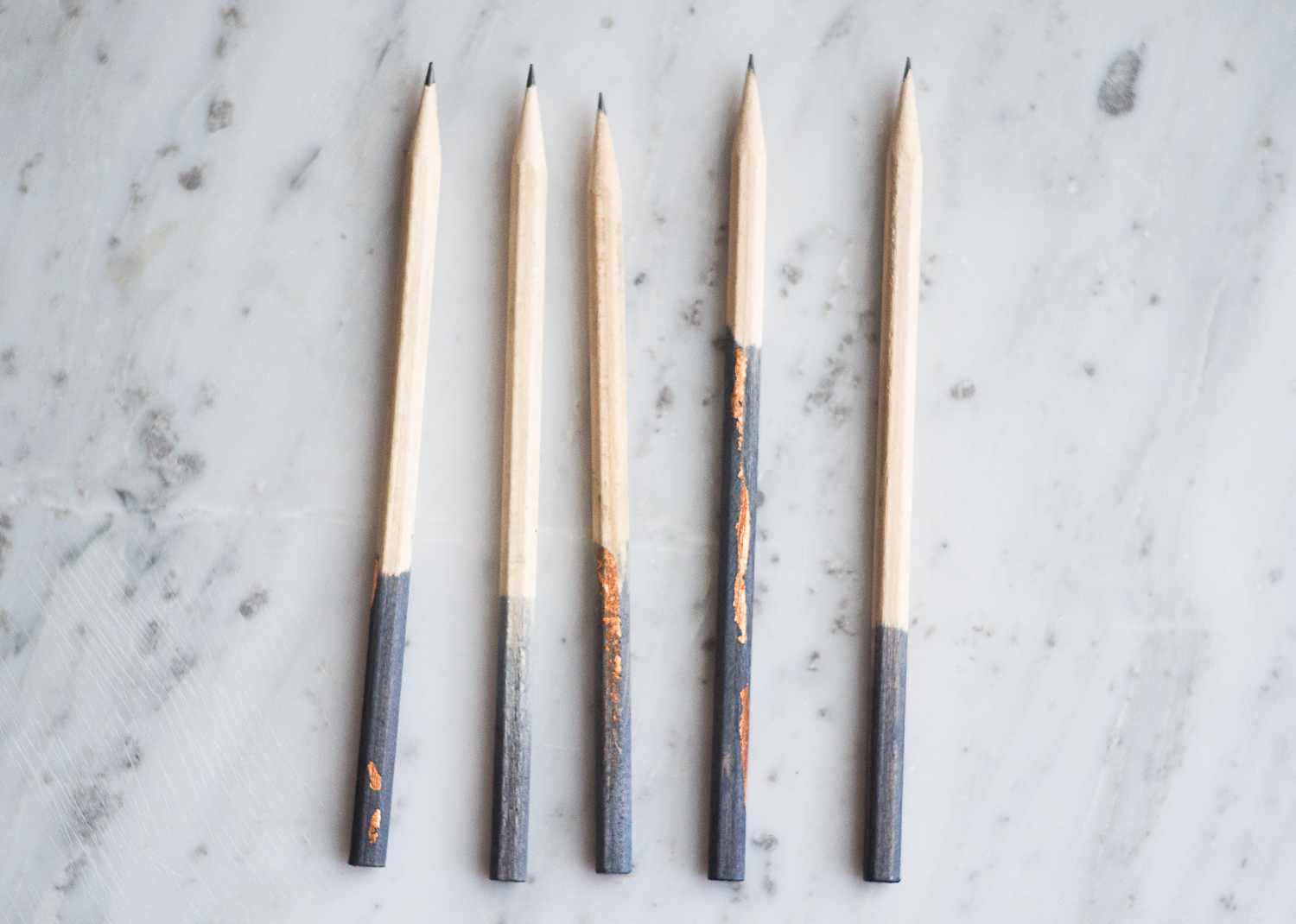 On a different note, writing blog posts about wedding stuff post-wedding has a funny taste. I’m writing about things I did when I was right in the throes of crazy bride haze, and some of it makes me want to go back and shake myself a little. Really, Kasia? Hand-dyed pencils? You didn’t have anything better to do with your time? I will be the first to admit that I got a little bogged down by some of these minute details that, at the end of the day, probably weren’t top priority.

But isn’t that the fun of it, a little? Yeah, it’s kind of dumb, in some ways, but it’s also a chance to justify, well, pretty much anything. A non-future-bride-Kasia would have a much harder time justifying spending time to apply copper leaf to pencils or hand-cutting confetti, but future-bride-Kasia considered that a very productive evening. I hate the word “craft” because it conjures up too many images of scrapbooking pages and twine-wrapped things, but damn, do I love to craft. There’s a big part of me that will miss that in this brave new post-wedding world. I’ve already found a lot of other things to suck up my time and energy, but in the meantime, if anyone is in the mood to do some gold-leafing…. 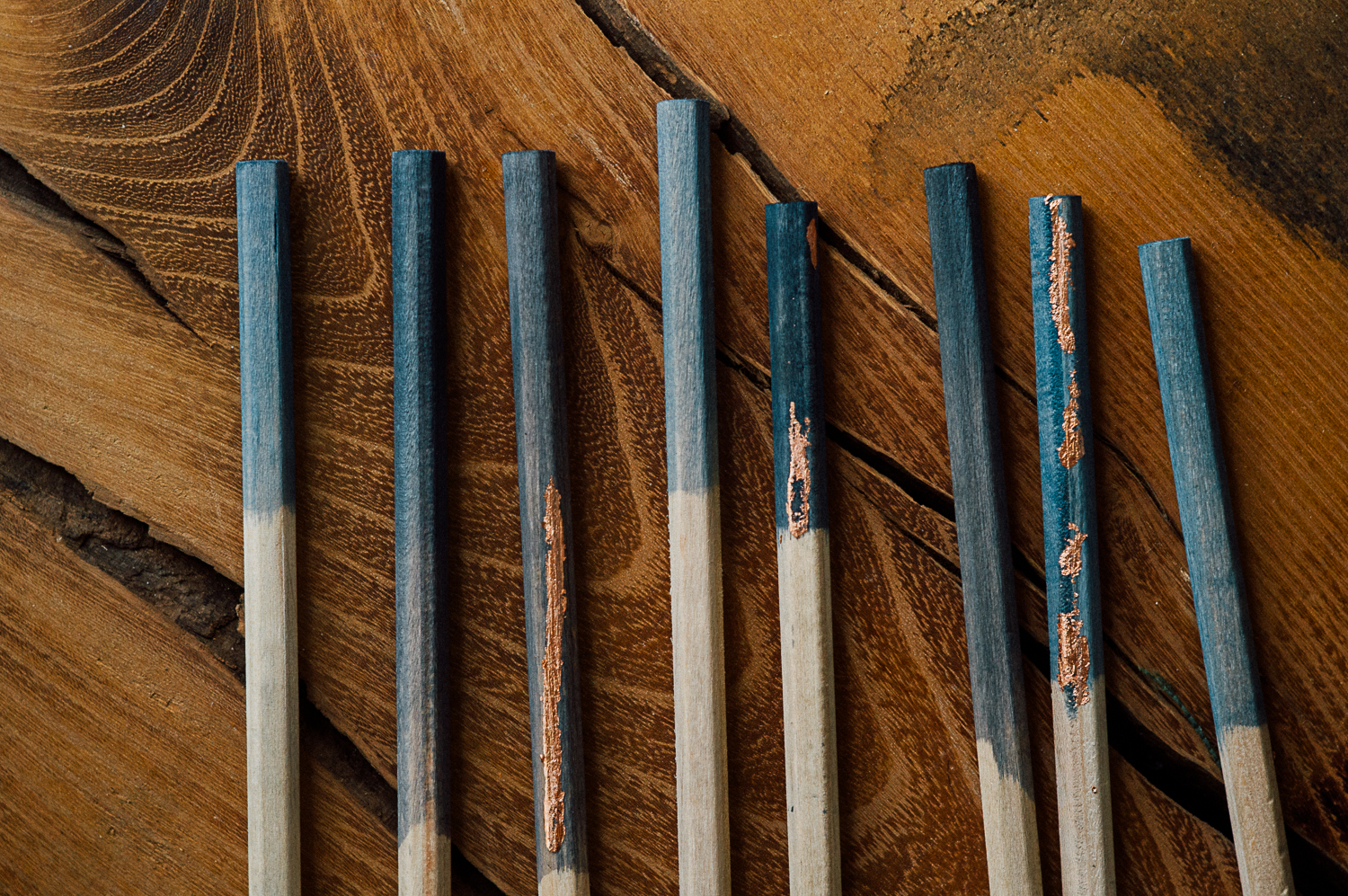 If my artisanal pencil biz could join forces with David Rees’ sharpening biz, we’d be unstoppable.