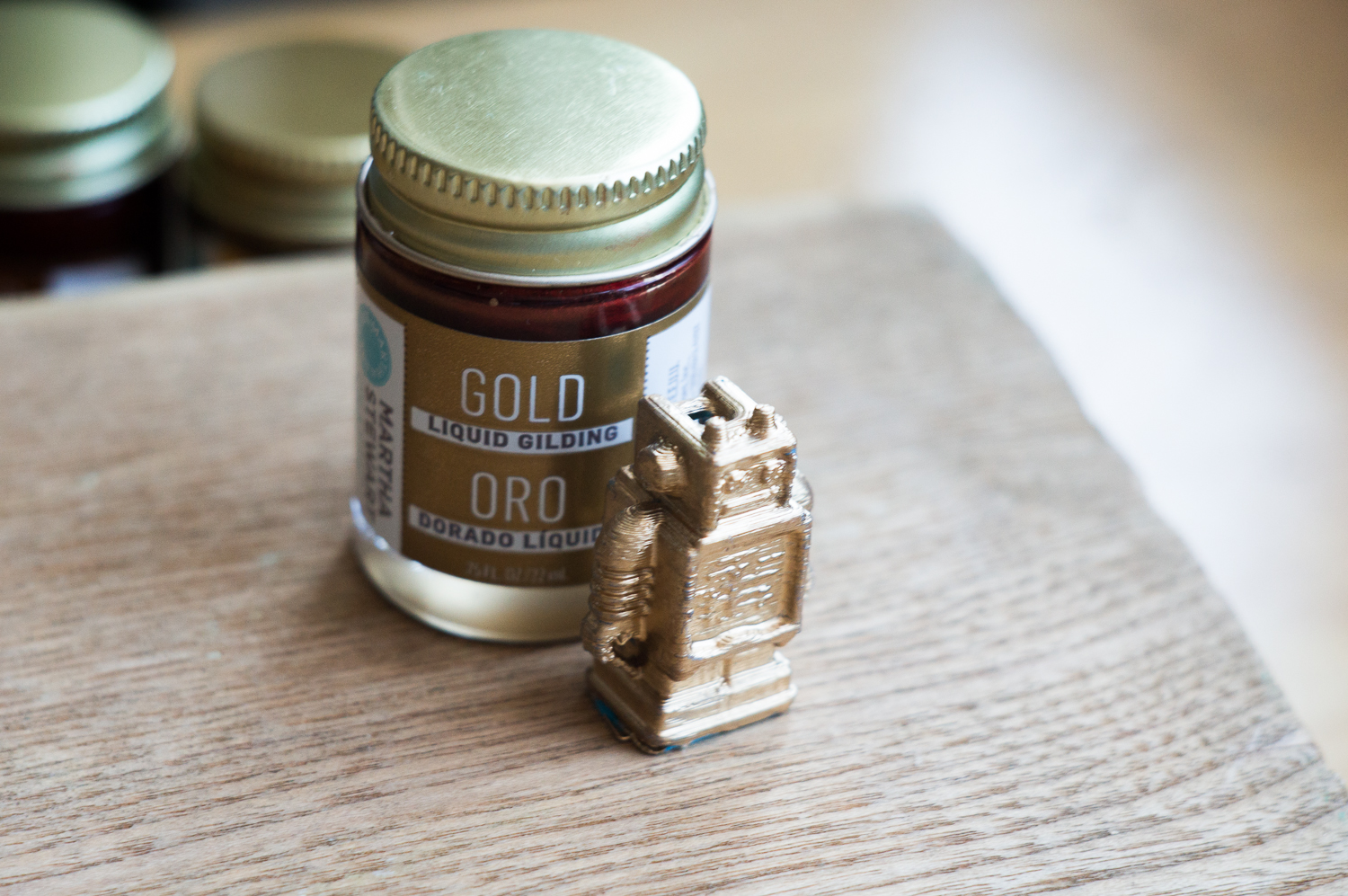 My love for Martha Stewart is deep and well-documented. The OG of the DIY world, Martha puts the rest of the human race to shame with perfection of her lifestyle (although she is seriously the worst at food photography). She also rocks the brocade jacket and dress pants at formal events better than anyone, except maybe Hillary. I hope they are friends. All this is just to say that I’m biased and I’m totally the target customer for the line of craft supplies she shills at Michaels, because I have blind faith in her stamp of approval when it comes to glitter and stuff.

So I was doing some online research into gold paint. Now, I was looking for something as close to a gold-leaf effect as possible- but it couldn’t be spray-on or actual leaf for our particular application (more on that later). I needed something that could be painted on- and metallic paints are frequently disappointing. I didn’t want shimmer, I wanted shine. I’m in good company, because a ton of nerds on the internet are constantly trying to make their action figures and spaceship models look like real metal. Also, cos-players. They tend towards the spray-on chrome options, which seem great, but some of them had some pro-tips to help me. 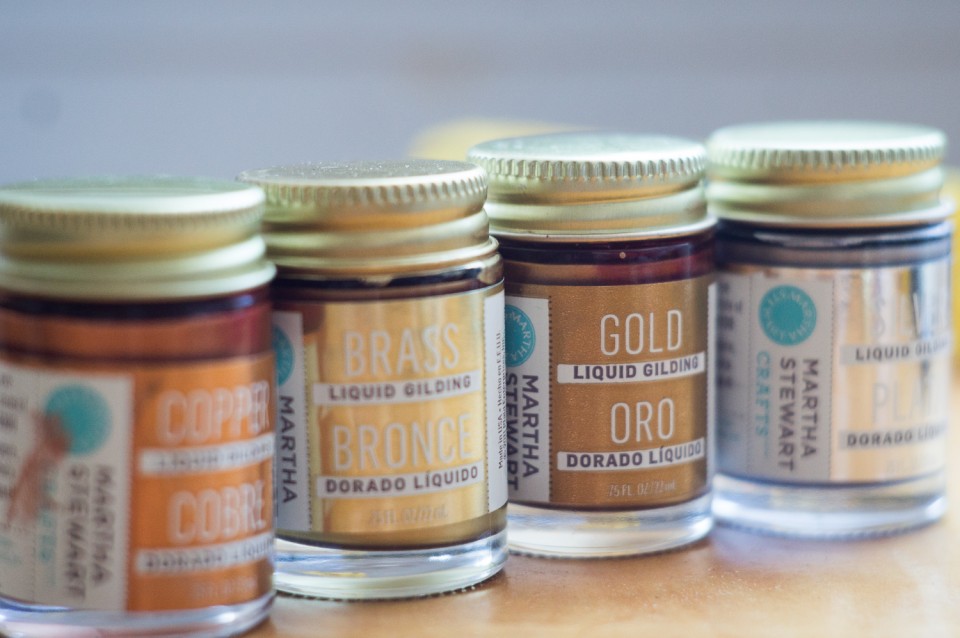 This stuff is pretty legit. It comes in .75 oz containers, and is available in 4 colors. The prices on Amazon range from about $4-8, so this isn’t something with which you should plan to paint your wall. I originally got just the gold and copper colors, but as soon as I tested them, immediately ordered the silver and brass because I was so damn excited. Now, don’t be dumb and make the mistake I did- this paint is NOT water-based. You’ll be able to tell as soon as you open the jar, because it will practically knock you out. But in my excitement, I used one of my good brushes to test the gold- and only as I was about to clean up realized my error. You need paint thinner to clean this up- nail polish remover will work in a pinch as well. My brush survived- but either be prepared with your materials, or be ready to sacrifice your brush. 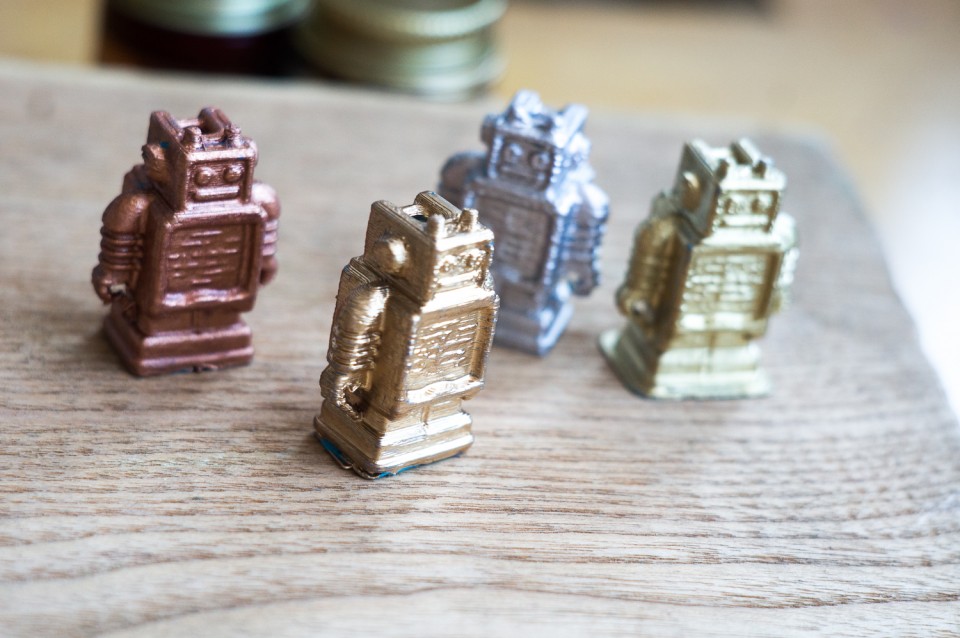 After painting some initial swatches on scrap materials, I started looking around for stuff I could gild. Luckily, I live in a hoarder’s paradise and our floor is littered with these tiny little robots that Nick prints to test the calibration of his 3D printers. Like, actually littered. I’ve picked up and thrown out at least a hundred of these- I found these four within a 3 foot radius of our coffee table. Perfect little test subjects.

The paint is most effective when it’s applied with a moderate to heavy hand and then allowed to level on its own. Brushing it on lightly doesn’t allow it to reach its full shine potential. Also, as in life, the smoother your object, the more beautiful it will be post-gilding. These robots are a little lumpy, but you get the idea. I also have found that a q-tip makes a great applicator for small surfaces like this. The cotton tip allows for variable pressure so you can really get into the little cracks of and object easily, and as a disposable item, no need to clean up with crazy chemicals. Maybe just don’t throw away, like, 100 q-tips into a garbage bag full of newspaper. I think these types of paints can start fires in your garbage, similar to the way an oil-soaked rag might combust (which is what happened to King Tut in his coffin). Not a great situation, and it would really put a damper on your gilding party.

So you’ve painted your stuff with q-tips or other appropriate applicators, you’ve disposed of your waste in a safe, non-flame-y way, and you’re assessing your results. I thin the gold is by far the best, both in color and finish. It has a lovely warmth with reddish undertones, as well as the most shine. My least favorite is the copper- I’m partial to fresh copper, that pretty pinky color. This is like a spool of copper wire that’s been sitting around a while- it’s not as lustrous as the others and it’s a bit dark for my taste.

So now I’m on the hunt for more stuff to paintings. I’m having some serious Paris Opera/Hall of Mirrors fantasies.

You know what they say: If it ain’t Baroque, you can fix it by painting it with fake gold.