50 Shades of Gray. And White. And Ivory. 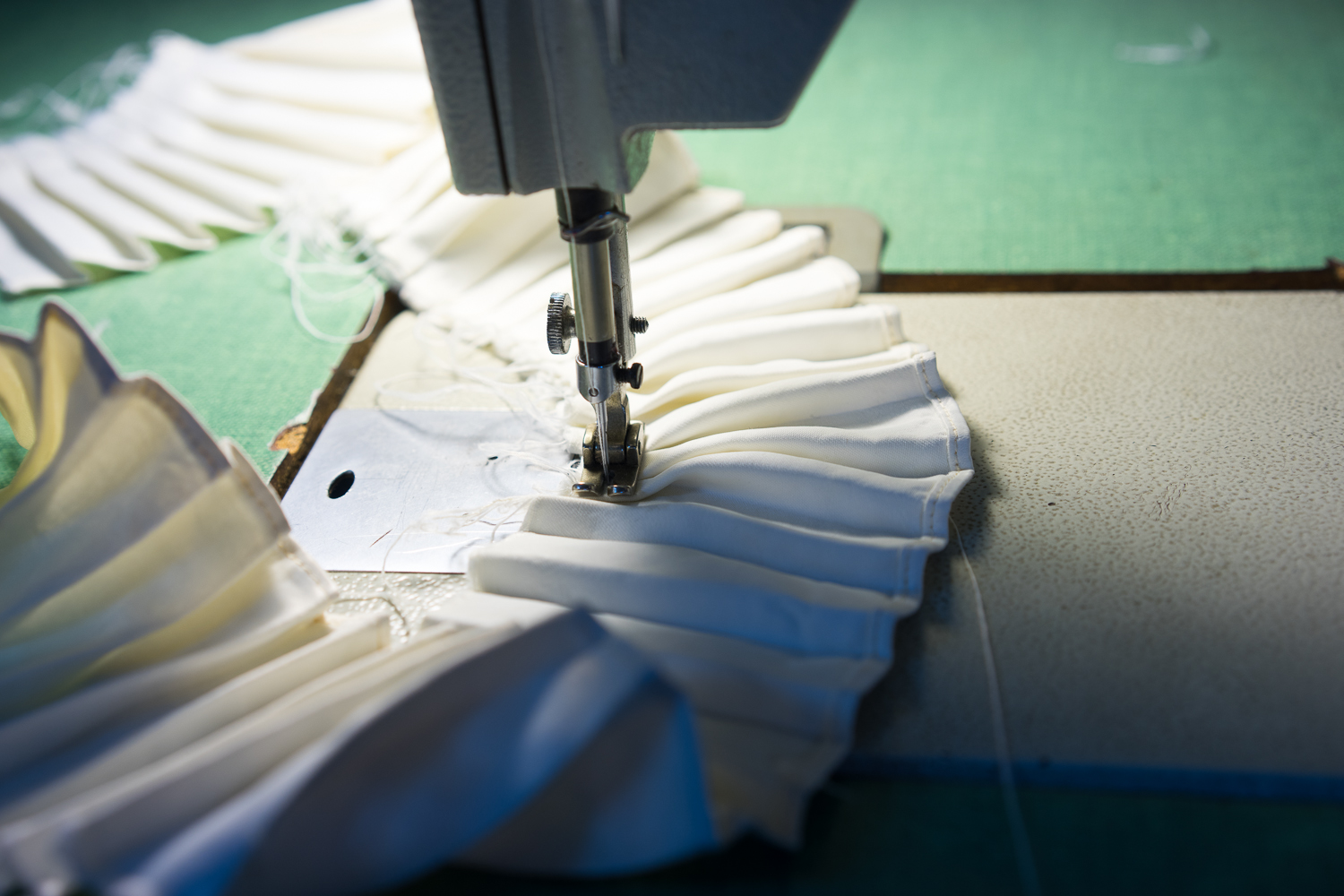 As Nick is currently galavanting across China and Taiwan, I’ve been trying to make a bit of progress on The Dress. I have about 8-ish days before he comes back- my very ambitious plan is to get the dress to about 90% before he returns, then pop it in a garment bag until late May/early June to do final fittings and last touches- you know, in case I turn into Taylor Swift and need to take it in a couple sizes and let down the hem.

A girl can dream.

But I’ve been making steady progress, and although that goal is VERY ambitious, there’s a possibility I will get it CLOSE to that point by the time he returns. With only 95 days to go (excuse me while I go throw up), I kind of have to.

Which brings me to today’s subject. Working in white and ivory is the biggest f***ing pain in the a$$. Seriously. Especially, if, like me, you’re cobbling a gown together out of hoarded lace headers and scraps. It’s even more annoying when 80% of your lace hoard is on the ivory side of the spectrum. See, I tend to prefer ivory lace over white lace, so I’ve naturally gravitated towards that when scouring garbage bags and super-sale bins for lace remnants (see, I am a legit hoarder; it’s not just hyperbole). But I decided I wanted a gray dress, and realized I needed white or VERY light ivory lace to make it work. I’ve spent probably hours at this point pinning lace appliques onto the dress, taking them off, replacing them with something else, taking that off, going back to the original… you catch the drift. It’s compounded by the fact that white and ivory, probably more so than many other colors, drastically changes in lighting conditions. I’m living my own real-life version of #thedress. Delightful.

I also have a piece of accordion-pleating taken from my mom/grandma’s dress that I’ve been desperate to use. Now, if you consult the photographic record, you’ll see that the gown is a pretty pronounced ivory- perhaps a “candelight,” or a “whipped butter” if you’re nasty. It’s quite a pretty color- but doesn’t quite work with the gray/white gown I’ve been working on. Hiding the pleats in the depths of the dress was not an option- it sort of defeats the purpose of having this little heirloom component. So the only option- and also the scariest option- was to dye the piece.

I considered trying to cover the ivory by dying it gray, but upon any sort of real consideration, realized that would probably end disastrously. Not only is gray an exceptionally difficult color to dye to, but starting with a very warm ivory base was sure to make it an even more arduous task. So I decided to try to knock the color out instead, by using a color remover.

Color removers are also known as reductive discharges. Most of the products you’ll see marketed as color removers- with the exception of bleach products and peroxide products- contain a reductive discharge chemical. Different fibers and dyes will require different formulas, so I like to buy a couple options and have them on hand to test out. You know the saying; If at first you don’t succeed, throw more time and money at it works.

I started, as one always should when undertaking a project like this, with a tiny corner of the pleated piece. I don’t know the fiber contents of the dress- although my guess is a poly blend or rayon. I used the Jacquard Color Remover– despite the fact that it says on the bottle, “Will not work on polyester,” I gave it a try because I’ve had good results with Jacquard products in the past on a number of fibers. I also tested a couple of corded lace appliques in the dye bath. Lace, because it frequently has multiple components (netting, motif fiber, cording, etc), is a nightmare to dye, so as long as you go into it with low expectations, you’ll be fine. The lace I have is already a light ivory, but I’m crazy and wanted to take down the yellow cast even MORE. 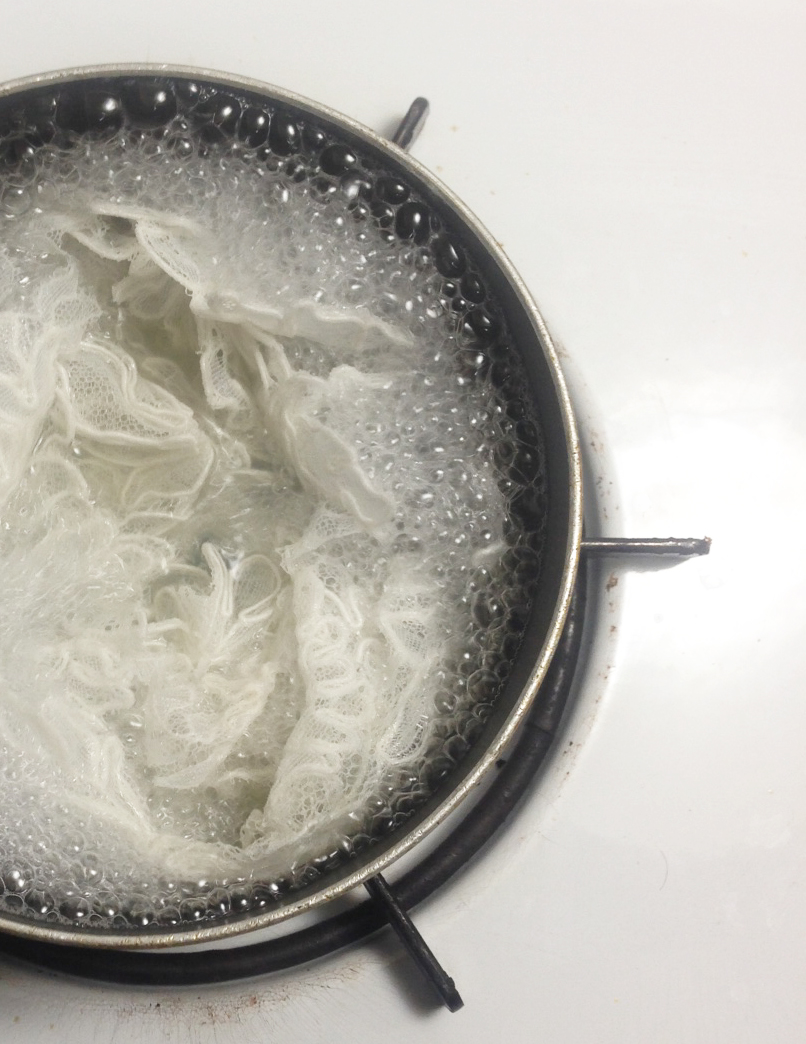 Despite the fact that dyeing IS an exact science, I didn’t treat it as such for this project. I kind of just boiled some water, added a generous sprinkle of the color remover, and popped my lace and fabric in there. Boil and agitate for 10-20 minutes, and voila- it actually WORKED. And by worked, I mean didn’t totally fail. The lace cording is still slightly ivory, but it’s a much brighter, cooler color that works better with my other dress textiles. The pleating, though, was night and day (even if my picture sucks): 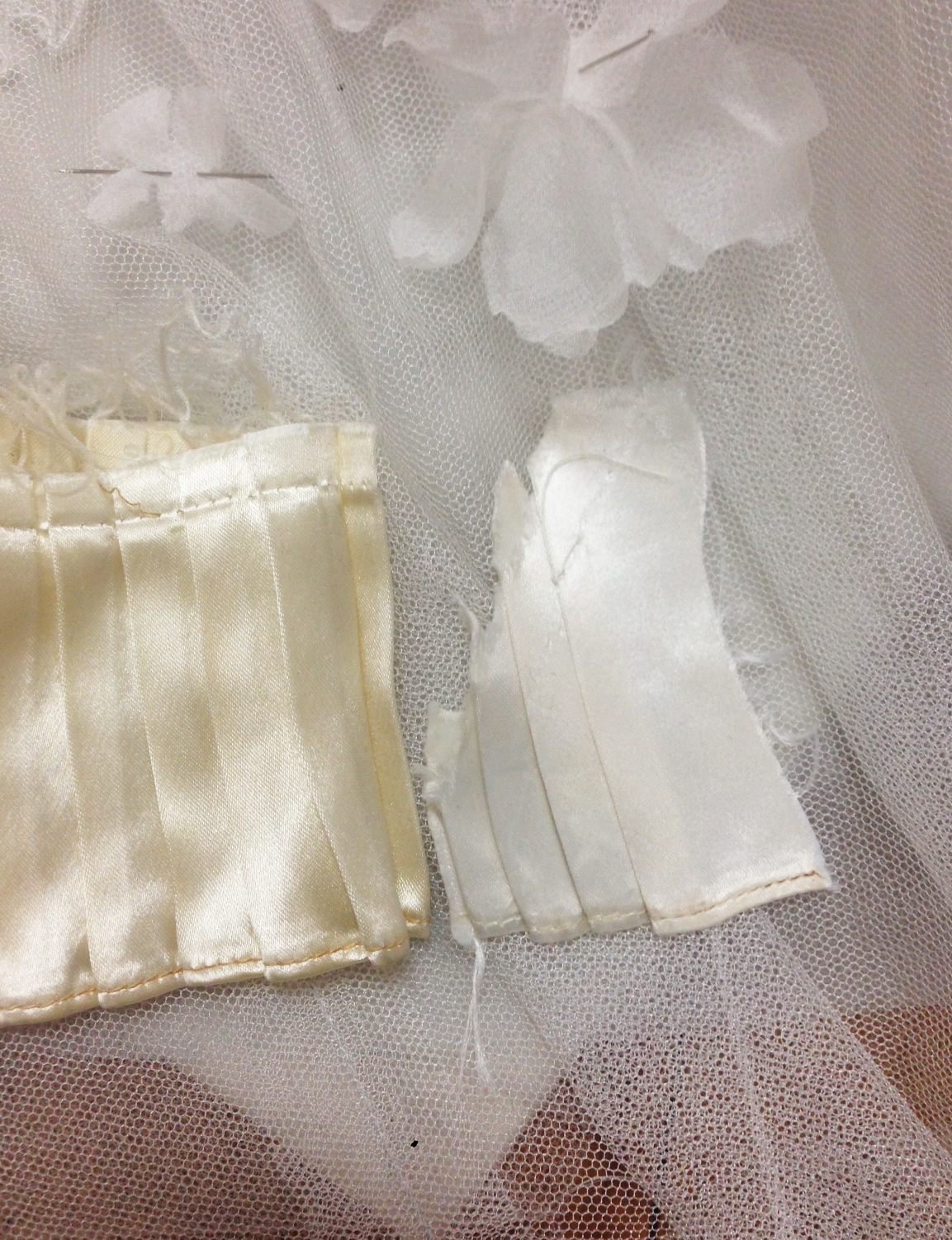 So I did the whole kit-and-caboodle- all the pleating and all my lace appliques went into the dye bath (in batches, of course). Unfortunately, boiling pleating tends to, well, take the pleats out as well. So I spent a couple hours pleating that sucker by hand, then stay-stitching the edge (top image). Despite the fact that I’m pretty f***ing sick of this BS cold weather we’ve been having the first week of Spring, I was a bit thankful for the chill as I stood over what was essentially a bubbling cauldron for an hour, and then over a steam-belching iron for another few. I’ve done the same in summer, and it’s significantly more uncomfortable. Incidentally, this was probably the closest I’ll get to a facial or spa day until after our wedding, so I should count my blessings.

I was texting my mom as I was working on this last night. I felt like a dick for taking the color out of the pleating- after all, that candlelight color was frequently a main descriptor when discussing the dress. But mom was cool about it. She said the reason she wore the dress in the first place was the sentiment behind it, and the pleating still has that in spades.

Knowing my luck, though, my future progeny will probably request it be dyed back to candlelight.